Eugenie Scott: Déjà vu all over again – Denialism of Climate Change and of Evolution

Both evolution and global warming are “controversial issues” in education, but are not controversial in the world of science. There is remarkable similarity in the techniques that are used by both camps to promote their views. The scientific issues are presented as “not being settled”, or that there is considerable debate among scientists over the validity of claims. Both camps practice “anomaly mongering”, in which a small detail, seemingly incompatible with either evolution or global warming, is held up as dispositive of either evolution or of climate science. Although in both cases, reputable, established science is under attack for ideological reasons, the underlying ideology differs: for denying evolution, the ideology of course is religious; for denying global warming, the ideology is political and/or economic. Eugenie Scott will deconstruct the arguments and identify the ideologies that hinder widespread understanding of evolution and responsiveness to climate change.

The Agricultural War of Palestine 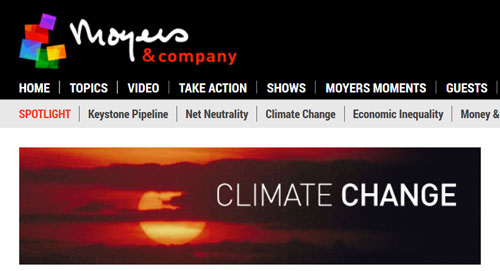 The Billionaires on Both Sides of Climate Change | Blog, Connecting the Dots

The New York Times’ Nicholas Confessore recently reported that Tom Steyer, a billionaire former hedge fund manager, is campaigning to get President Obama to say no to the Keystone XL pipeline. He plans to spend $100 million (or more) during the 2014 midterm elections supporting candidates with strong environmental platforms and opposing politicians such as Florida Gov. Rick Scott who deny the reality of climate change. He hopes to raise $50 million from like-minded wealthy individuals to match $50 million of his own money. Confessore reports that Steyer, a Democrat, is hoping to build the prevention of climate change into an issue that all Americans will get behind.

[Steyer is] seeking to upend the partisan split that has come to infuse the climate debate. In their advertising and research, Mr. Steyer and his aides have sought to craft appeals that would reach beyond affluent white liberals on the coasts. Ads in California were tailored to Hispanic voters by emphasizing the negative health impacts of power plant emissions. In the Virginia governor’s race, [Steyer’s
political advocacy organization] sought to show that a Democrat could win with a message emphasizing “green” job creation over one emphasizing threats to the state’s coal industry.

Articles on Tom Steyer cast his politically active family — including his wife, Kat Taylor, and his brother, Jim — as a liberal analog to the Koch brothers. The Kochs have spent heaps of money since the Supreme Court’s Citizens United ruling seeking to influence public opinion and political decision-making on an array of issues, ranging from health care reform to climate change to deficit reduction. Like the Kochs, Steyer started his life as a political spender with a handful of issues, but, unlike the Kochs, he has homed in on just one. In a piece published last September, New Yorker Washington Correspondent Ryan Lizza asked Jim and Tom Steyer about the validity of the Koch comparison, and Tom pointed out another difference: Unlike the Kochs, he doesn’t stand to profit from his political position.

‘In the words of Nicholas Stern’s 2006 report, climate change is “the greatest market failure the world has ever seen”.’ Photograph: Corbis

It’s an unmistakable taste of things to come. The floods that have deluged Britain may be small beer on a global scale. Compared with the cyclone that killed thousands in the Philippines last autumn, the deadly inundations in Brazil or the destruction of agricultural land and hunger in Africa, the south of England has got off lightly.

But the message has started to get through. This is exactly the kind of disaster predicted to become ever more frequent and extreme as greenhouse gas-driven climate change heats up the planet at a potentially catastrophic rate. And it’s exposed the David Cameron who wanted to “get rid of all the green crap” and who slashed flood defence spending by £100m a year as weak and reckless to his own supporters.

Of course there have been plenty of floods in the past, and it’s impossible to identify any particular weather event as directly caused by global warming. But as the Met Office’s chief scientist Julia Slingo put it, “all the evidence suggests that climate change has a role to play in it”. With 4% more moisture over the oceans than in the 1970s and sea levels rising, how could it be otherwise?

If it weren’t for the misery for the people at the sharp end, you might even imagine there was some divine justice in the fact that the areas hit hardest, from the Somerset Levels to the Thames valley are all Tory heartlands. It’s the same with the shale gas fracking plans the government is so keen on: the fossil fuel drilling and mining so long kept away from the