MAP: Here’s How Climate Change Has Impacted Your City | ThinkProgress

“MAP: Here’s How Climate Change Has Impacted Your City” 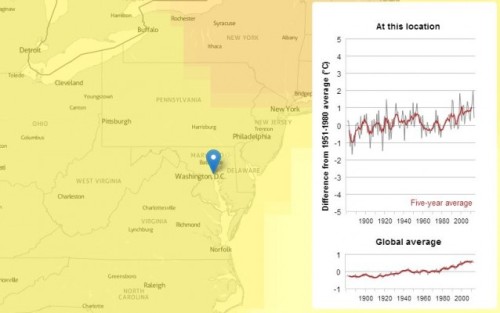 The dead of winter is a hard time for climate journalists. As snow falls from the sky, like it does and will continue to do every winter, climate deniers are given more fodder to make baseless claims. “It’s freezing outside and you’re whining about warming,” they say, as if a localized weather event were reflective of a long-term global climate shift.

Frustrating as it is, the inevitable increase in climate change trolling during cold season is at the very least beneficial because it forces us to remind ourselves of the long-term nature of climate change. Climate change does not manifest itself as one hot day, nor does it disprove itself with one freezing night. In fact, it is characterized by swaths of peer-reviewed data that have shown clear warming trends at every corner of the globe — not just outside our windows — over the last 125 years.

Nowhere does this fact manifest itself more than in a newly updated interactive map from the weekly science and technology magazine New Scientist. Titled “Our Warming World,” the map — published a year ago and updated last week with 2013 data — shows yellow, orange, and red splotches to illustrate just how much different areas have warmed up over the years, in some cases since 1881. The colors are relative to the average temperature between 1951 and 1980, a period New Scientist says is “the earliest period for which there was sufficiently good coverage for comparison” worldwide. It uses Surface Temperature Analysis data from the NASA Goddard Institute for Space Studies. 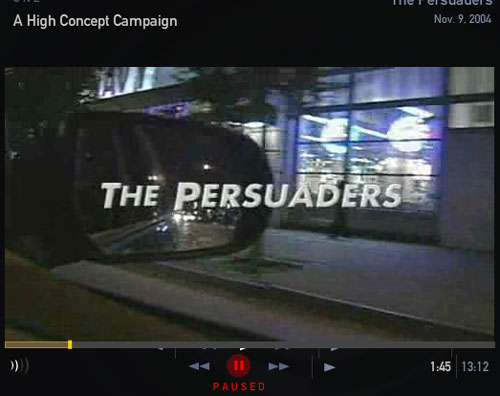 Americans are swimming in a sea of messages.

Each year, legions of ad people, copywriters, market researchers, pollsters, consultants, and even linguists—most of whom work for one of six giant companies—spend billions of dollars and millions of man-hours trying to determine how to persuade consumers what to buy, whom to trust, and what to think. Increasingly, these techniques are migrating to the high-stakes arena of politics, shaping policy and influencing how Americans choose their leaders.

In “The Persuaders,” FRONTLINE explores how the cultures of marketing and advertising have come to influence not only what Americans buy, but also how they view themselves and the world around them. The 90-minute documentary draws on a range of experts and observers of the advertising/marketing world, to examine how, in the words of one on-camera commentator, “the principal of democracy yields to the practice of demography,” as highly customized messages are delivered to a smaller segment of the market.

Take the 2004 presidential sweepstakes for example. Both the Republicans and the Democrats were prepared to go to extraordinary lengths to custom craft their messages. “What politicians do is tailor their message to each demographic group,” says Peter Swire, professor of law at Ohio State University and an expert on Internet policy. “That means…Americans will live in different virtual universes. What’s wrong with living in different universes? You never confront the other side. You don’t have to deal with the uncomfortable facts that go against your worldview….It hardens the partisanship that’s been such a feature of recent American politics.”

They are the merchants of cool: creators and sellers of popular culture who have made teenagers the hottest consumer demographic in America. But are they simply reflecting teen desires or have they begun to manufacture those desires in a bid to secure this lucrative market? And have they gone too far in their attempts to reach the hearts–and wallets–of America’s youth?

FRONTLINE correspondent Douglas Rushkoff examines the tactics, techniques, and cultural ramifications of these marketing moguls in “The Merchants of Cool.” Produced by Barak Goodman and Rachel Dretzin, the program talks with top marketers, media executives and cultural/media critics, and explores the symbiotic relationship between the media and today’s teens, as each looks to the other for their identity.

Teenagers are the hottest consumer demographic in America. At 33 million strong, they comprise the largest generation of teens America has ever seen–larger, even, than the much-ballyhooed Baby Boom generation. Last year, America’s teens spent $100 billion, while influencing their parents’ spending to the tune of another $50 billion.

But marketing to teens isn’t as easy as it sounds. Marketers have to find a way to seem real: true to the lives and attitudes of teenagers; in short, to become cool themselves. To that end, they search out the next cool thing and have adopted an almost anthropological approach to studying teens and analyzing their every move as if they were animals in the wild.

http://www.democracynow.org – Former National Security Agency lawyer Stewart Baker and Pentagon Papers whistleblower Daniel Ellsberg join us for a debate on Edward Snowden’s disclosure of the NSA’s massive spying apparatus in the United States and across the globe.

Snowden’s leaks to The Guardian and other media outlets have generated a series of exposés on NSA surveillance activities — from its collection of American’s phone records, text messages and email, to its monitoring of the internal communications of individual heads of state. Partly as a consequence of the government’s response to Snowden’s leaks, the United States plunged 13 spots in an annual survey of press freedom by the independent organization, Reporters Without Borders. Snowden now lives in Russia and faces possible espionage charges if he returns to the United States. Baker, a former NSA general counsel and assistant secretary for policy at the Department of Homeland Security, is a partner at the law firm Steptoe & Johnson and author of “Skating on Stilts: Why We Aren’t Stopping Tomorrow’s Terrorism.” Ellsberg is a former Pentagon and RAND Corporation analyst and perhaps the country’s most famous whistleblower. Ellsberg leaked the Pentagon Papers in 1971, exposing the secret history of the U.S. involvement in Vietnam, prompting Henry Kissinger to call him “the most dangerous man in America.”

What’s next? Fear and Hope: Hal Harvey at TEDxSanDiego 2013

The mathematics of climate change can be a scary thing. With extreme weather activity happening all over the world, we are finding increased summer temperatures, floods and droughts becoming more prevalent and seemingly unavoidable. We are not equipped to handle these extremes and it can be physically impossible to deal with them on some levels. What needs to be done? While the numbers are scary, Harvey is one of the few people in the climate change movement focusing on progress: as the technology improves, prices come down and usage goes up. While we need to act now, Harvey points us to a possible future with alternative energy that’s grounded in facts, not hype.

In part two of his interview, David Simon, creator of the TV series “The Wire” and “Treme,” talks to Bill about the triumph of capital over democracy.

A special report on a 185-mile trek through the winter cold in New Hampshire, led by activist Lawrence Lessig, to raise awareness of the crippling problem of corruption in American politics.

Republicans are keeping the religious right and its obsessions front and center.

http://www.alternet.org/belief/how-christian-rights-stranglehold-gop-has-made-our-politics-insane
How the Christian Right and Tea Party Make the GOP Unhinged
AlterNet / By Amanda Marcotte 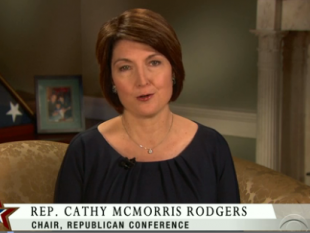 As the 2014 election season gears up—and various politicians start floating the possibility of a 2016 presidential run—the question of what Republicans need to do about the religious right is only getting more serious. It’s become apparent that the religious right is an electoral albatross for Republicans. The invention of the “Tea Party” reflected this desire to bamboozle the press into forgetting that the Republican Party is controlled by a bunch of right-wing Christians, by floating this narrative that this new insurgence of conservative energy was somehow more about economic conservatism than social conservatism.

That narrative has basically collapsed in the face of overwhelming evidence that the Tea Party’s main impact is encouraging Republican primary voters to back even more embarrassingly Bible-thumping candidates than usual, from Ted Cruz to Christine O’Donnell. It’s impossible to ignore that the biggest result of the supposed Tea Party revolution has been to refocus Republican energies on attacking abortion rights and expanding the war on women to include attacks on previously non-controversial issues, such as insurance coverage of birth control and maternity care. Turns out the “Tea Party” was the same old religious right people know and loathe.

The religious right is increasingly a problem for the Republican Party. But it’s not one they can get rid of without creating even more problems for themselves.

The 2012 election really demonstrated how much the religious right hurts Republicans in general elections. The various “rape philosophers” who lost elections after making offensive remarks about rape victims [3] were, by and large, expressing ideas about female sexuality and sexual violence they got by being stalwart warriors for the religious right. Todd Akin’s claim that “legitimate rape” didn’t result in pregnancy is a fairy tale told by Christian conservatives to convince themselves that exceptions in their preferred abortion bans for rape are unnecessary. Richard Mourdock’s claim that rape happens [4] because it’s God’s plan was more of the same.

But this was a continuation of the trend of candidates in competitive elections losing because they say wacky things they learned as Christian conservatives. Sharron Angle’s weird religiosity—including a similar tendency to describe rape as a blessing in disguise [5]—led to her defeat in a previously competitive 2010 election against Harry Reid. (She beat out a more moderate Republican in the primary, in part because of the Tea Party insurgency.) Tea Party favorite Christine O’Donnell tanked her election after talking about Christian right obsessions like witchcraft and sexual “purity.” The trend continued right through 2013 when Ken Cuccinelli lost his bid to be governor of Virginia because of his hostility to reproductive rights and his outdated campaign to recriminalize sodomy in Virginia.

This isn’t a problem in conservative districts where ficus trees could win as long as they were the official Republican nominees, but as these examples show, the religious right severely limits the Republicans’ ability to expand beyond that, especially when it comes to bigger elections with a broader base of voters—like the presidential election. Because of that, it seems the smart thing to do would be to quit running the Todd Akins and Ken Cuccinellis and go for candidates who don’t have the stench of misogynistic fundamentalism about them.

Created by Oren Ginzburg and narrated by David Mitchell.

We are Survival, the global movement for tribal peoples’ rights.

We’re the only organization that champions tribal peoples around the world. We help them defend their lives, protect their lands and determine their own futures.

Tribal peoples have developed ways of life that are largely self-sufficient and extraordinarily diverse. Many of the world’s staple crops and drugs used in Western medicine originate with them, and have saved millions of lives. Even so, tribal peoples are portrayed as backward and primitive simply because their communal ways are different. Industrialized societies subject them to genocidal violence, slavery and racism so they can steal their lands, resources and labor in the name of ‘progress’ and ‘civilization’.

Our work is preventing the annihilation of tribal peoples. We give them a platform to speak to the world. We investigate atrocities and present evidence to the United Nations and other international forums. We support legal representation. We fund medical and self-help projects. We educate, research, campaign, lobby and protest. And we won’t give up until we all have a world where tribal peoples are respected and their human rights protected.

We depend on you. We need your money, energy and enthusiasm to help us fight one of the most urgent and horrific humanitarian crises of our time.