Ten big pharmaceutical companies are uniting with the National Institutes of Health in a five-year cooperative program to study major diseases. The companies and the NIH will share scientists, samples and research on Alzheimer’s disease, diabetes, rheumatoid arthritis and lupus. Results will be free for anyone to use. Monica Langley of the Wall Street Journal joins Hari Sreenivasan to speak about the groundbreaking collaboration.

From its extraction through sale, use and disposal, all the stuff in our lives affects communities at home and abroad, yet most of this is hidden from view. The Story of Stuff is a 20-minute, fast-paced, fact-filled look at the underside of our production and consumption patterns. The Story of Stuff exposes the connections between a huge number of environmental and social issues, and calls us together to create a more sustainable and just world. It’ll teach you something, it’ll make you laugh, and it just may change the way you look at all the stuff in your life forever. http://storyofstuff.org

And for all you fact checkers out there: http://storyofstuff.org/movies/story-…

Help us caption & translate this video!

From its extraction through sale, use and disposal, all the stuff in our lives affects communities at home and abroad, yet most of this is hidden from view. The Story of Stuff is a 20-minute, fast-paced, fact-filled look at the underside of our production and consumption patterns. The Story of Stuff exposes the connections between a huge number of environmental and social issues, and calls us together to create a more sustainable and just world. It’ll teach you something, it’ll make you laugh, and it just may change the way you look at all the stuff in your life forever.

See http://www.storyofstuff.com/
We have a problem with Stuff. We use too much, too much of it is toxic and we don’t share it very well. But that’s not the way things have to be. Together, we can build a society based on better not more, sharing not selfishness, community not division.

The Story of Stuff Project’s journey began with a 20-minute online movie about the way we make, use and throw away all the Stuff in our lives. Five years and 40 million views later, we’re a Community of 500,000 changemakers worldwide, working to build a more healthy and just planet. We invite you to watch and share our movies, participate in our study programs and join our campaigns. Come on, let’s go!

The activist Erin Brockovich was the subject of a film starring Julia Roberts about a town that rallied against a power company for leaking a chemical into their drinking water. Mike O’Sullivan reports the environmental crusader remains an activist and is using her personal story to inspire students. 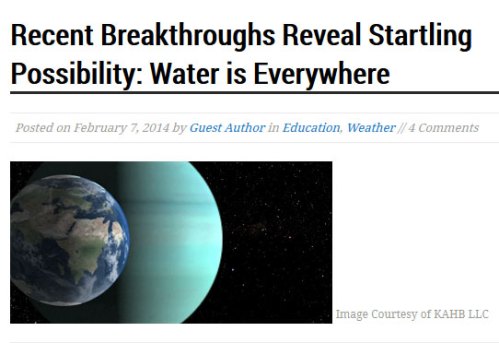 In 1986, some scientists laughed as other scientists seriously pondered the existence of water on Mars. Today we know that there is ice, and even the potential for liquid water on the surface of Mars. That news made headlines, especially with the newest rover sending back close-up images and data from direct samples.

The vast majority of relevant and more-surprising information on the topic of extraplanetary water has managed to go under the radar. Additionally, breakthroughs in extreme-environment chemistry, astronomy, physics, and more have not yet been expressly interconnected to draw new hypothetical inferences about the nature of the universe, and the abundance of life.

In STARWATER, an educational documentary outlining the relevant research about water outside earth, we examine the wide range of places to find water, and why this is likely to be true everywhere. Would you believe that we have proof of water on every planet? We discovered permanent ice near the poles of Mercury, many moons of Jupiter and Saturn are icy spheres with liquid oceans beneath the surface, the centers of Neptune and Uranus are icy materials, and Pluto is mostly made of water ice.

That’s right, earth does not have the only liquid water oceans in the solar system, and Pluto is a ball of frozen water. It gets better…

We found water vapor in sunspots, in massive quantities in pre-planetary and pre-stellar nebulae, and surrounding black holes. We have even discovered some exoplanets that appear to have watery atmospheres, based on spectral emission. Surrounding our solar system, and other stars as well, we find a pseudo-shell of rocks and ice that mark the boundary of the solar wind. This icy shell explains a good deal of the water found in our solar system, and likely found in others. The solar wind has been discovered to contain nearly every known element, a startling revelation about elemental production, but it is mostly comprised of hydrogen and hydrogen ions.

Residents of the flood-hit Somerset Levels have accused Environment Agency chairman Lord Smith of “letting everyone down”, as he visited the area.

Lord Smith said he had “no intention” of resigning in the face of criticism for not doing more to help but resident Jim Winkworth said he was “bloody mad” not to get an apology from the peer.

Prime Minister David Cameron, who also visited the area, promised: “Everything that can be done will be done.”

The prime minister travelled to the Somerset Levels and admitted there were “lessons to learn” from the situation.

David Cameron: “There are lessons to learn… but right now the priority is that everyone in Somerset who needs help is getting help”

Mr Cameron, who met farmers and walked through flood water in Wellington boots, said: “One of the big ones is that the pause in dredging that took place from the late 1990s, that was wrong, and we need to get dredging again.”

He pledged help to those affected by floods, saying: “Clearly, people have faced a very tough time and continue to face a tough time, and that’s why we have to do everything we can to help.”

He added: “Everything that can be done will be done and I will make sure that happens.”

The Met Office has severe weather warnings in place for rain and wind in southern England and Wales, with further rain warnings issued for the Midlands, east of England and Northern Ireland.