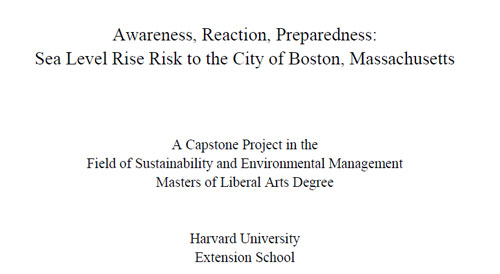 This analytical study offers insight into sea level rise risks to the city of Boston, Massachusetts. Potential gaps in official plans for sea level adaptation and an understanding of the typical Bostonian’s reactions are discussed. Historical background reviews how the city of Boston was founded on a small peninsula in the year 1630. To expand the city, Boston developed on landfill. Over 50% of Boston was built on this fill – today comprising some of the most valuable real estate in the US. The risks from rising waters are very real; with the concern that little has been done to protect Boston from the sea since the Charles River Watershed, Charles River Dam and the Amelia Earhart Dam were developed. Qualitative research, discussing this Capstone Project topic with both experts in the field of sea level rise and non-expert members of the community, was the primary research method used in the report. Secondary sources include scientific journals, government reports and news articles on the topic. Data and Results research uncovered several approaches to a workable adaptation plan: The most viable of those under consideration are:

Boston’s analytical efforts and strategy are impressive, but the city needs to immediately move to an action phase that includes specifics on timing and funding. If the average Bostonian does not feel that sea level rise will impact their way of life, negative reactions to FEMA’s 2013 flood maps are an opportunity to make the issue a cause. Sea level adaptation must be part of the city of Boston’s official 2014 plan, utilizing a multi-faceted, layered strategy that will protect all of Boston’s citizens and neighborhoods. 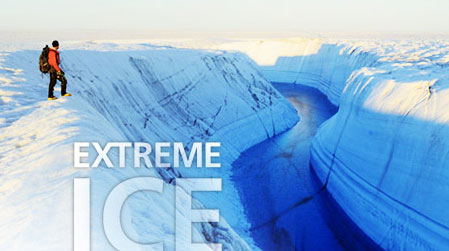 An acclaimed photographer teams up with scientists to document the runaway melting of arctic glaciers. Aired December 18, 2013 on PBS

Mothers Out Front – Mobilizing for a Livable Climate 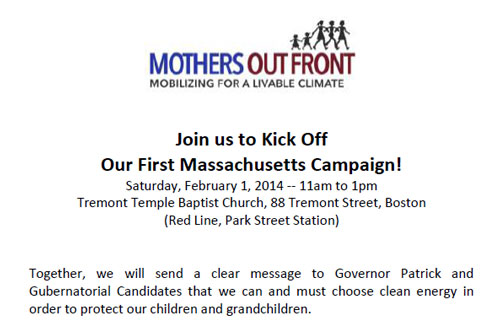 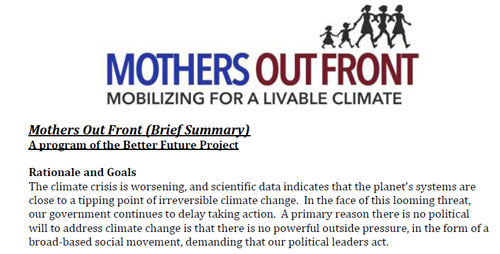 (Visit: http://www.uctv.tv/) The International Labour Organization estimates that 20.9 million people around the world are currently held in forced labor and servitude. Human trafficking is constantly in the headlines in the United States, but it can be hard to separate fact form fiction. Martina Vandenberg will debunk the myths and examine concrete case studies compiled in her two decades combating trafficking in the US and abroad.

I Went to NAFTA, CAFTA & SHAFTA & All I Got Was This… TPP

Environmental journalist and author Duncan Clark argues that tackling global warming means persuading the world to leave fossil fuels in the ground. But does the political and economic will exist to make this a reality?

http://www.democracynow.org – On issues from domestic inequality to foreign policy, President Obama delivered the fifth State of the Union with a vow to take action on his own should Congress stonewall progress on his agenda. But will Obama’s policies go far enough? We host a roundtable with three guests: Jeremy Scahill, producer and writer of the Oscar-nominated documentary “Dirty Wars: The World is a Battlefield;” and senior investigative reporter at First Look Media, which will launch in the coming months; Bob Herbert, Distinguished Senior Fellow with Demos; and Lorella Praeli, Director of Advocacy and Policy at the United We Dream Coalition.

Every day, migrants from Africa try to cross the Atlantic to start a new life abroad. The city of Nouadhibou in northern Mauritania serves as a revolving door for them. But that journey is