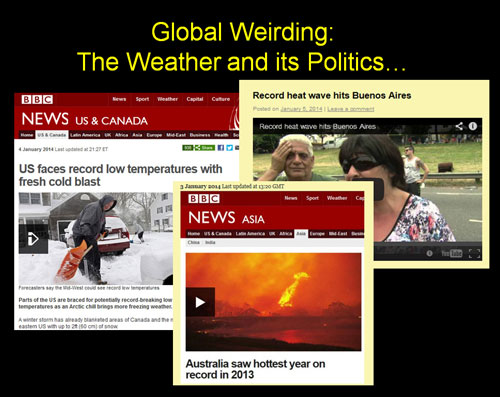 We are experiencing weird weather AND the scientifically ignorant and politically motivated press is distorting the to create confusion.

Do What I Say, Not as I Do: MSNBC Global Warming Edition

Jim Bruce is a former assistant deputy minster of Environment Canada. He is also the former deputy secretary general of the World Meteorological Organization and a former co-chair of the Intergovernmental Panel on Climate Changes Working Group on Economics and Social Dimensions.

Judy Curry is a chair at the School of Earth and Atmospheric Sciences at Georgia Institute of Technology.

David Pearson is professor in the Department of Earth Sciences at Laurentian University and the co-director of the Science Communication Program. He is the former host of Understanding the Earth on TVO and Down to Earth on Mid-Canada Television.

TVO – Climate IV: What to Do? Geoengineering!

Is geoengineering the answer to the world’s climate change woes?

David Keith is director of ISEEE Energy and Environmental Systems Group, the Canada research chair in Energy and the Environment at the University of Calgary.

TVO – Climate II: The Media, the Scientists and the Planet

Read our blog post “Climate Change: Did I confuse you?” on TVO.org: http://bit.ly/auFuZ1

Curtis Brainard is the editor of The Observatory, an online critique of science and environment reporting from the Columbia Journalism Review.

Nicola Jones is Science Journalist in Residence and an Adjunct Professor at the UBC School of Journalism. She is also a working freelance journalist who acts as a commissioning editor for the Opinion section of the Nature Network.

Joseph Romm is a senior fellow at the Center for American Progress. He oversees the blog ClimateProgress.org, which was named one of Time Magazine’s Fifteen Favorite Websites for the Environment in 2007.

Walter Russell Mead is Henry A. Kissinger senior fellow with the Council on Foreign Relations. He is the author of several books, includuing God and Gold: Britain, America, and the Making of the Modern World. He is also the author of a blog at The American Interest.

Quentin Chiotti is a senior climate change scientist and senior director of Atmospheric Issues at Pollution Probe. His areas of expertise include climate change impacts and adaptation.

Tyler Hamilton is an energy and technology columnist with the Toronto Star and could be called Mr. Clean. His column Clean Break surveys the world of green technologies and products that help Canadian businesses, homeowners and industry do more with less energy, and produce more with less waste.

TVO – Climate I: Is The Debate Over?

What is, and isn’t, settled about climate science.

Hadi Dowlatabadi is Canada research chair and professor in Applied Mathematics and Global Change at the University of British Columbia.

Richard Lindzen is a professor of Meteorology at the Massachusetts Institute of Technology.

A panel discussion on climate science and climate justice with the world’s foremost climate scientist, Dr. James Hansen, as well as Naomi Klein, author of The Shock Doctrine: The Rise of Disaster Capitalism, and Clayton Thomas-Muller, the Indigenous Environmental Network’s Tar Sands Campaigner. The event moderator is Dr. Cynthia Wesley-Esquimaux.

The conservative argument to act on climate change

Republican Bob Inglis’ belief that climate change is real helped get him booted from Congress by a Tea Party primary challenger in 2010. He talks with Chris Hayes about his ongoing efforts to convince Republicans to act on global warming.

http://climatesilence.org?source=youtube 10/16/12: MSNBC contributor Chris Hayes criticizes President Barack Obama and Governor Mitt Romney for debating energy policy and competing to be the “pro-coal candidate” without mentioning the consequences of the climate pollution.