Hume: Keystone XL Pipeline should be a no-brainer for Obama

Senator Barbara Boxer (D-Calif.), Chairman of the Committee on Environment and Public Works (EPW), and Senator Bernie Sanders (I-VT), held a news conference to announce comprehensive legislation, the Climate Protection Act (S. 332). Senator Sanders serves on the EPW Committee and also is a member of the Senate Energy and Natural Resources Committee.

S. 332 calls for a fee on carbon pollution emissions that would fund historic investments in energy efficiency and sustainable energy technologies, such as wind, solar, geothermal, and biomass. The proposal also provides rebates to consumers to offset any efforts by oil, coal, or gas companies to raise prices.

U.S. Senator Barbara Boxer (D-CA), Chairman of the Environment and Public Works Committee, spoke out on the Senate floor against a proposed amendment supporting the construction Keystone XL pipeline as part of the Shaheen-Portman energy bill (9/12/13)

In our news wrap Friday, California announced it would have to stop contributing the state’s supply of water to people and farms due to severe drought. Also, President Obama appealed directly to CEOs that they they create employment opportunities for Americans who have been unemployed for six months or more. 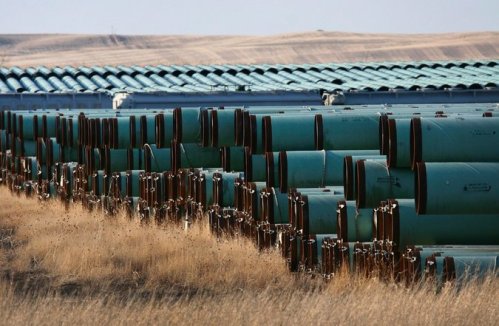 Pipes for the 1,700-mile Keystone XL pipeline lie at the ready in a field in Gascoyne, N.D. Nathan Vanderklippe/Globe & Mail/Reuters

WASHINGTON — The State Department released a report on Friday concluding that the Keystone XL pipeline would not substantially worsen carbon pollution, leaving an opening for President Obama to approve the politically divisive project.

The department’s long-awaited environmental impact statement appears to indicate that the project could pass the criteria Mr. Obama set forth in a speech last summer when he said he would approve the 1,700-mile pipeline if it would not “significantly exacerbate” the problem of greenhouse gas emissions. Although the pipeline would carry 830,000 barrels of oil a day from Canada to the Gulf Coast, the report appears to indicate that if it were not built, carbon-heavy oil would still be extracted at the same rate from pristine Alberta forest and transported to refineries by rail instead.

The report sets up a difficult decision for Secretary of State John Kerry, who now must make a recommendation on the international project to Mr. Obama. Mr. Kerry, who hopes to make action on climate change a key part of his legacy, has never publicly offered his personal views on the pipeline. Aides said Mr. Kerry was preparing to “dive into” the 11-volume report and would give high priority to the issue of global warming in making the decision. His aides offered no timetable.

“He’ll deliberate and take the time he needs,” said Kerri-Ann Jones, the assistant secretary of state for oceans and international affairs.

Environmentalists said they were dismayed at some of the report’s conclusions and disputed its objectivity, but they also said it offered Mr. Obama reasons to reject the pipeline. They said they planned to intensify efforts to try to influence Mr. Kerry’s decision. For more than two years, environmentalists have protested the project and been arrested in demonstrations against it around the country. But many Republicans and oil industry executives, who support the pipeline because they say it creates jobs and increases supplies from a friendly source of oil, embraced the findings.

The State Department is expected to shortly release the results of an inspector general’s investigation into the preparation of an earlier draft of the environmental impact report. The investigation was ordered after an environmental group obtained documents indicating that some consultants for the firm that wrote the draft report had previously done work for TransCanada, the company seeking to build the pipeline. If investigators determine a conflict of interest in the preparation of that draft, the State Department may have to conduct a new environmental review.

In light of the investigation, environmentalists were particularly critical of the report released on Friday.

“In what could be perceived as eagerness to please the oil industry and Canadian government, the State Department is issuing this report amidst an ongoing investigation into conflicts of interest, and lying, by its contractor,” said Erich Pica, the president of Friends of the Earth.

When tourists visit Panama, they enjoy the beaches, islands, and mountain forests. ELAW Staff Scientist Heidi Weiskel was in Panama this month with a different agenda.

Heidi used her marine ecologist’s eye to take in what’s threatening Panama’s natural environment. She joined ELAW partners to tour a new highway project that has cut through Panama Bay, the site of a proposed mega-port near Colon, and the site of a gold and copper mine that threatens the Tonosi and Quema Rivers on the Azuero Peninsula.

The coral reefs and mangroves in the area where ‘Puerto Verde’ is planned are showing very important signs of recovery from oil spills in the 1980s,” says Heidi. “If this ‘green port’ — a miserable misnomer — goes forward, the mangroves will be cut and the seabed, including the reefs, will be dredged. We met with subsistence fishermen and farmers in the area and none of them want the port.”

The team decides to use an old barn for building a cabin.

The capital Rome also experienced heavy rain, especially in the north of the city where at least one subway stop was closed for flooding and where traffic was snarled by rising water and fallen tree limbs.

The Flip Side of Obama’s Keystone XL Delay

Even as President Obama cast a veneer of caution over the Keystone pipeline’s northern half, he quietly expedited dozens of similar projects.
By Steve Horn | September 7, 2013 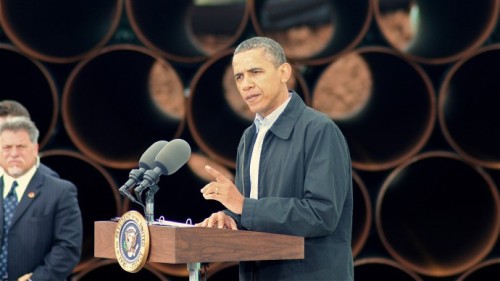 While President Obama made a big deal out of delaying the northern half of the Keystone pipeline’s construction, he compensated by signing an executive order to expedite similar infrastructure projects everywhere else. (Photo/Matt Wansley via Flickr)

Large segments of the environmental movement declared a win on Jan. 18, 2012, the dawn of an election year in which partisan fervor reigned supreme.

On that day President Barack Obama kicked the can down the road for permitting TransCanada’s Keystone XL pipeline’s northern half until after the then-forthcoming November 2012 presidential election.

“Northern half” is the key caveat: just two months later, on March 22, 2012 – even deeper into the weeds of an election year – President Obama issued Executive Order 13604. Among other key things, the order has an accompanying memorandum calling for an expedited review of the southern half of Keystone XL stretching from Cushing, Okla. to Port Arthur, Texas.

The day before, March 21, Obama flew on Air Force One to a pipe yard in Cushing – the “ and photo-op announcing the executive order and memorandum.

Dubbed the Gulf Coast Pipeline Project by TransCanada – 95 percent complete and “open for business” in the first quarter of 2014 – the 485-mile tube will ship 700,000 barrels of tar sands crude per day from Cushing to Port Arthur, where it will then reach Gulf Coast refineries and be exported to the global market. It will eventually have the capacity to ship 830,000 barrels per day.

The subject of a large amount of grassroots resistance from groups such as Great Plains Tar Sands Resistance and the Tar Sands Blockade, the Gulf Coast Pipeline Project – when push comes to shove – is only the tip of the iceberg.

That’s because Obama’s order also called for expedited permitting and review of all domestic infrastructure projects – including but not limited to pipelines – as a reaction to the Keystone XL resistance.

Rather, many key pipeline and oil and gas industry marketing projects are currently up for expedited review, making up for — and by far eclipsing — the capacity of Keystone XL’s northern half. The original TransCanada Keystone pipeline – as is – already directly connects to Cushing from Alberta, making XL (short for “extension line”) essentially obsolete.

Dubbed the Bakken Marketlink Pipeline, the segment has lost its importance with the explosive freight rail boom for moving Bakken fracked oil to market and other pipeline proposals. One of those pipelines, in fact, has received fast-track approval under the March 2012 Obama Executive Order.

The Extraordinary Climate And Environmental Legacy Of Henry Waxman 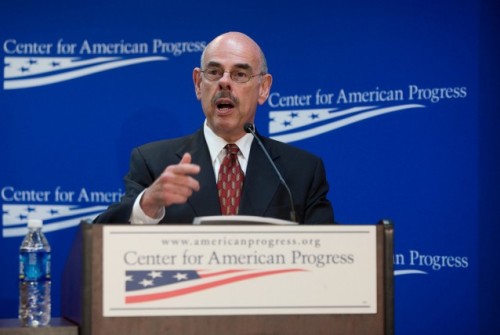 Following 40 years of sustained fighting on behalf of human health, the environment, and a livable climate, Congressman Henry Waxman (D-CA) announced on Thursday that he would retire from Congress after this year.

“In 1974, I announced my first campaign for Congress,” he said Thursday in a press release. “Today, I am announcing that I have run my last campaign. I will not seek reelection to the Congress and will leave after 40 years in office at the end of this year.” When the news hit the House GOP, their reaction spoke volumes of how strong a legislative adversary he was to them.

A Waxman-less Congress leaves a gaping hole on serious climate policy. Former Rep. Tom Davis (R-VA), the Ranking Member of the House Oversight and Government Reform Committee when Waxman was Chair, described him as a formidable opponent: “he may be short in his stature, but he can be 10 feet tall if you get in his way.”

While the Congressman still has almost a year to add a few more bullet points to his already-full legislative record, here is a short list of his most notable climate and environmental accomplishments:

Climate change stayed a national legislative priority. “To me, this is an issue more important than all the other things we’re spending time on,” he told the National Journal in 2013. “It’s more important than the budget, sequestration, the debt ceiling — 10 years, maybe five years from now, people aren’t going to say, ‘What did we do on those issues?’ They’re going to say, ‘What did Congress do on climate change?’”

There is no EPA regulation of CO2 without Waxman.. The reason that President Obama has the ability to regulate greenhouse gases under the Clean Air Act is because Congressman Waxman helped write it. The existing Clean Air Act was under threat of being weakened from the moment President Reagan was inaugurated for the first time in 1981. At first, Waxman and some of his colleagues merely tried to keep the important bill from being gutted. As the years went by, Reagan and his allies in Congress failed to weaken the Act, and Waxman and his allies ended the decade with a slew of strong amendments. Some of those found their way into a bill that strengthened the Clean Air Act in 1990, signed by George H.W. Bush. The Supreme Court decided in 2007 that the language in the Act meant greenhouse gases could qualify as pollutants under the law. The EPA has been moving to regulate those pollutants since 2009, starting with vehicle emissions and continuing with new and existing power plants today.