Let’s Reframe the Way We Talk About Development: Andrea Stachnik at TEDxMontereyWomen

BBC News – The restaurant that serves up rejected food 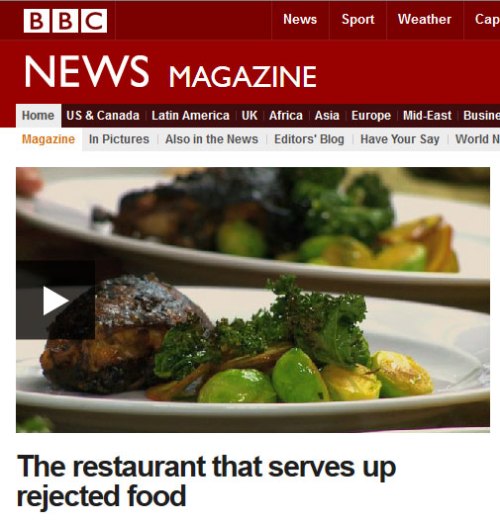 Stop/Start is a series of video features for the BBC News website which follows both new trends that are beginning and old traditions that are coming to an end.

BBC News – The science and environment news highlights of 2013

It was the year in which an object from the cosmos burned and boomed its way through our atmosphere while one originating on Earth hurtled into the uncharted territory of interstellar space.

BBC News website science editor Paul Rincon looks back at a memorable year of science and environment headlines. And you can view a picture gallery of the highlights here.

Fire in the sky

On 15 February, skywatchers were gearing up for the close flyby of Earth by a large asteroid. But on the day of that pass, a different 10,000-tonne space rock burned up over Chelyabinsk, Russia, injuring more than 1,000 people as its shockwave shattered glass and rocked buildings.

This spectacular “cosmic coincidence” gave scientists an unprecedented opportunity to study the anatomy of an asteroid strike, in part thanks to the dashboard cameras – dashcams – installed by Russian drivers to combat insurance scams and police corruption. The largest chunk of the meteorite was later retrieved from the bottom of Lake Chebarkul. 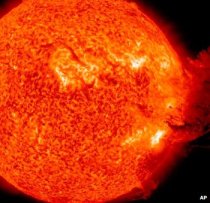 The Met Office is to begin offering daily forecasts about the weather in space.

The 24 hour service will aim to help businesses and government departments by providing early warnings of solar storms that can disrupt satellites, radio communications and power grids.

The first forecast is expected to be available next spring.

The Department for Business will support the scheme with £4.6m of funding over the next three years.

The Met Office will aim to develop better ways of predicting space weather in collaboration with the US National Oceanic and Atmospheric Administration.

UK partners involved in the project include the British Geological Survey, Bath University and RAL Space.

Space weather is driven by energetic particles from the Sun.

They have the potential to damage sensitive satellite components and induce current surges strong enough to knock out power grids on Earth.

A massive blackout in Quebec in 1989 has been attributed to a solar storm.

The Sun’s activity peaks about every 11 years, when solar emissions become more intense. It is currently in a “solar maximum” phase.

Mark Gibbs, head of space weather at the Met Office, said: “Space weather is a relatively immature science but understanding is growing rapidly.”

‘US, UK media are slaves of security apparatus’ – Greenwald

Journalist Glenn Greenwald condemned the mainstream media during an address at a German computer conference on Friday and accused his colleagues of failing to challenge erroneous remarks routinely made by government officials around the globe. READ MORE: http://on.rt.com/l29ia9

The time of good cheer has turned out to be a time of sadness for some of our neighbours in the Caribbean Community (CARICOM). Fate dealt a cruel blow to many families in the Eastern Caribbean when their loved ones were cruelly swept away in flood waters on Christmas Eve. As the grim picture of the event becomes clearer, it has been reported that more than a dozen lives have been lost, some villages marooned, and thousands are without electricity and water.

The tragedy is especially painful as traditional Christmas celebrations make this the jolliest season of the year for families. But instead of celebrating, Christmas Day was shrouded in darkness for many in St Lucia, St Vincent and the Grenadines, and Dominica after high winds downed power lines.

Ideas At The House

When natural resources like timber, water and mineral deposits can be extracted from ecosystems, they become assets with dollar values that can be bought and sold internationally and enable developing countries to grow and participate in the global economy. If growth is the key to emerging from poverty, then this might seem like a good thing. But what if these same resources being sold to richer nations come from an ecosystem that people depend on for their livelihood? What if new growth is actually proportional to the creation of new poverty?

The cult of ‘growth’ has dictated policy for decades. But if well-being, not growth, is our goal, selling resources that bring long term wellbeing to communities for short term gain is a very bad deal. Hard as it may be for the West to understand, protecting the ecological resources of communities might be more important than GDP figures.

Vandana Shiva holds a PhD in physics, but is best known as an environmental, and anti-globalisation activist and as a leading figure of ‘ecofeminism.’ Shiva is based in India and is the author of over twenty books, including Staying Alive and Biopiracy. She is a former recipient of the Sydney Peace Prize.

Chair: Simran Sethi is an award-winning Indian American journalist. She is currently undergoing a research fellowship at the University of Melbourne in Australia on the loss of agricultural biodiversity in our food system.

Subscribe and find more videos from Ideas at the House: http://www.youtube.com/ideasatthehouse

Footage from the March Against Monsanto in Melbourne Australia. David Holmgren is the co-originator of permaculture and this is his wisdom on Vandana Shiva’s Seed Freedom movement, Monsanto GMO’s and the theft of Roundup resistance. David stars in the new documentary, United Natures alongside Vandana Shiva, Starhawk, Polly Higgins, Father Bob Maguire, Cormac Cullinan, Dr. Helen Caldicott and many others.

farmer Jaswant Sainhara never thought he could be an activist. But in August he was among the thousands of farmers from across 20 Indian states who braved sweltering heat to demonstrate in New Delhi against the Biotechnology Regulatory Authority of India (BRAI) Bill.

The BRAI Bill ensures that India’s government will have all the rights to regulate the research, transport, import, manufacture and use of organisms and products of modern biotechnology. India recently rejected two patent appeals by biotech giant Monsanto, dealing the latest setback to a company that recoups its research investments in large part via its sale of patents.

But the world’s largest democracy has to do more to beat back the dangers of GMOs. And India’s organic seed banks might just be the natural weapon required to defeat the GMO beast.

The center, headquartered in New Delhi with a biodiversity farm in Dehradun, grows more than 1,500 varieties of seed in organic settings where the seeds adapt to seasonal variations — like lots of rain one season and no rain the next. Navdanya was created to protect farmers in the context of emerging threats like the TRIPS (Trade Related Intellectual Property Rights) Agreement put forward by the World Trade Organization, which further opened the door to introducing GMOs, patents on seed and the collection of royalties from those patents.

For a country in the grips of biological manipulation by companies like Monsanto, organic seeds are increasingly viewed as a much-needed counterweight. To that end, Navdanya has grown to become a network of seed keepers and organic producers spread across 17 states in India, providing crucial sanctuaries of biodiversity with 111 community seed banks and operations that have trained over 500,000 farmers in seed sovereignty and sustainable agriculture. It also operates as a collective powered by the people it seeks to serve, promoting a rise in women farming especially.

Shiva says we are living in a moment that demands an “emergency saving of seeds,” as plants become ever more appropriated and colonized by corporations in the form of intellectual property. “Seed is not just the source of life. It is the very foundation of our being,” says Shiva.

Navdanya also has a center called the Bija Vidyapeeth (whose literal meaning is School of Seed) that teaches the importance of biodiversity and organic farming. Since 1991, Navdanya has organized farmers through the Bija Satyagraha Movement to keep farmers in control of their seeds in defiance of laws that make seed a corporate monopoly — and make seed saving and seed sharing a crime.