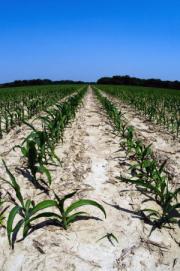 Dec. 16, 2013 — A warmer world is expected to have severe consequences for global agriculture and food supply, reducing yields of major crops even as population and demand increases. Now, a new analysis combining climate, agricultural, and hydrological models finds that shortages of freshwater used for irrigation could double the detrimental effects of climate change on agriculture.

Given the present trajectory of greenhouse gas emissions, agricultural models estimate that climate change will directly reduce food production from maize, soybeans, wheat and rice by as much as 43 percent by the end of the 21st century. But hydrological models looking at the effect of warming climate on freshwater supplies project further agricultural losses, due to the reversion of 20 to 60 million hectares of currently irrigated fields back to rain-fed crops.

“It’s a huge effect, and an effect that’s basically on the same order of magnitude as the direct effect of climate change,” said Joshua Elliott, a research scientist with the Computation Institute’s Center for Robust Decision Making on Climate and Energy Policy (RDCEP), Argonne National Laboratory, and lead author of the paper. “So the effect of limited irrigation availability in some regions could end up doubling the effect of climate change.”

The research was led by Elliott and colleagues from the Agricultural Model Intercomparison and Improvement Project (AgMIP), as part of the Inter-Sectoral Impacts Model Intercomparison Project (ISI-MIP). The paper is among 12 featured in a special feature dedicated to ISI-MIP research in Proceedings of the National Academy of Sciences, published online December 16.

Agricultural models and hydrological models both incorporate the influence of climate, but are designed by different scientific communities for different purposes. While agricultural models simulate how temperature, precipitation and other climate factors may alter the yield for various crops, hydrological models seek to estimate water-related characteristics such as stream flow, water availability, and storm runoff.

The two types of models overlap in estimating the amount of water used for agricultural irrigation, by far the largest human use of freshwater in the world. But when Elliott and colleagues fed each type of model with the same climate model forecasts, the models produced dramatically different predictions about the future demand for freshwater irrigation

The researchers discovered discrepancies in how hydrological models incorporate processes such as the carbon cycle and crop water productivity when compared to agricultural models — a finding that will help make existing models more accurate.

The Climate Champions Of 2013

In a year that saw carbon pollution levels hit the milestone of 400 parts per million in the atmosphere and brought record-breaking drought, fires, typhoons, and air pollution, it can be easy to forget there are climate champions out there, pushing back on those climate grinches. Here are a few of the climate heroes that made progress, inspired, or otherwise made an impact in 2013:

Three days after Typhoon Haiyan made landfall, Philippines climate negotiator Naderev “Yeb” Saño told the delegation at the 19th United Nations Framework Convention on Climate Change (COP19) that his island nation had run out of time for failed climate negotiations. Saño vowed to go on a hunger strike until “clear progress was made.” Saño challenged climate change deniers and countries less impacted by the effects of global warming, saying, “I dare them, I dare them to get off their ivory towers and away from the comfort of their armchairs. I dare them to go to the islands of the Pacific, the Caribbean, the Indian ocean and see the impacts of rising sea levels; to the mountainous regions of the Himalayas and the Andes to see communities confronting glacial floods, to the Arctic where communities grapple with the fast dwindling sea ice caps, to the large deltas of the Mekong, the Ganges, the Amazon, the Nile where lives and livelihoods are drowned, to the hills of Central America that confronts similar monstrous hurricanes, to the vast savannas of Africa where climate change has likewise become a matter of life and death as food and water become scarce. … And if that is not enough, you may want to pay a visit to the Philippines right now.” 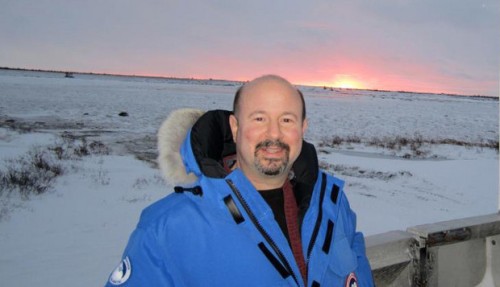 Michael Mann, who directs Penn State University’s Earth System Science Center and is the creator of the “hockey-stick” graph, which illustrates the recent spike in global temperatures, has been the target of legal battles for years. He has been investigated by Penn after his email was hacked during so-called “climategate” and in 2010 was accused of defrauding Virginia taxpayers while he was a faculty member at the University of Virginia. Virginia attorney general Ken Cuccinelli demanded access to every document relating to his research during that time. Mann has never been convicted of any wrong-doing and now, Cuccinelli has been defeated in the 2013 Virginia gubernatorial race. Climate denial was a central issue in the race with fossil fuel companies backing Cuccinelli, while climate activists spent millions for Terry McAullife. Cuccinelli’s “witch hunt” after Mann was held up as an example of Cuccinelli prioritizing his own radically conservative agenda over the concerns of his constituents. McAuliffe said that “the fact that UVA was forced to spend $600,000 to defend itself from its own Attorney General is outrageous.”

The Los Angeles Times announced in 2013 that it will no longer publish letters from climate change deniers.

“Simply put, I do my best to keep errors of fact off the letters page; when one does run, a correction is published,” wrote letters editor Paul Thornton explaining his decision. “Saying ‘there’s no sign humans have caused climate change’ is not stating an opinion, it’s asserting a factual inaccuracy.”

Climate change deniers have long argued that the extent of man-made global warming has been wildly exaggerated in order to advance an agenda that includes more government control and decried the decision by the LA Times as taking a political side. The LA Times has chosen to listen to the 97 percent of scientists who believe that climate change is happening and that it is in large part the result of human actions. Many in the scientific community applauded the decision by the LA Times, hoping the decision would give other outlets the courage to stop “appeasing the climate change denial noise machine.” The Times was followed by PopularScience’s decision to shut off its comments and Reddit’s science forum prohibiting posts and comments by people who deny the realities of man-made climate change.

million in identifiable foundation support. The overwhelming majority of the philanthropic support comes from conservative foundations. Additionally, there is evidence of a trend toward concealing the sources of CCCM funding through the use of donor directed philanthropies.

Environmental activists hold placards as they protest during the 19th conference of the UN Framework Convention on Climate Change in Warsaw Nov. 21, 2013. Several major environmental groups, including Greenpeace and WWF, have walked out of UN climate talks in Warsaw to protest what they see as a lack of progress towards an international deal to curb rising global greenhouse gas emissions. Reuters

Conservative donors are driving the climate change “countermovement” by pumping billions of dollars into organizations that actively try to derail efforts to curb global warming, according to new analysis of the financial structure that maintains the denial effort.

The study, conducted by Robert Brulle, an environmental sociologist at Drexel University in Philadelphia, was published Friday in the journal Climate Change. His investigation exposed the vast network of conservative think tanks, foundations, trade associations and advocacy groups that work to undermine public faith in climate change. He found that donors spend $1 billion a year to fight climate change policy, including U.S. government regulations that would limit carbon emissions.

“I call it the climate-change counter movement,” Brulle told the Guardian. “It is not just a couple of rogue individuals doing this. This is a large-scale political effort.”

While Brulle notes that the anti-climate change movement is still largely bankrolled by a handful of conservative billionaires, the bulk of donations are “dark money,” collected from funders who conceal their contributions by going through third-party foundations like Donors Trust and Donors Capital. The report found that 91 think tanks and industry groups make up the bulk of the climate change opposition movement. Among them are Searle Freedom Trust, the John William Pope Foundation, the Howard Charitable Foundation and the Sarah Scaife Foundation

http://www.theguardian.com/environment/earth-insight/2013/dec/19/industrial-agriculture-limits-peak-food
Most conventional yield projection models are oblivious to the real world say US researchers

Industrial agriculture could be hitting fundamental limits in its capacity to produce sufficient crops to feed an expanding global population according to new research published in Nature Communications.

The study by scientists at the University of Nebraska-Lincoln argues that there have been abrupt declines or plateaus in the rate of production of major crops which undermine optimistic projections of constantly increasing crop yields. As much as “31% of total global rice, wheat and maize production” has experienced “yield plateaus or abrupt decreases in yield gain, including rice in eastern Asia and wheat in northwest Europe.”

The declines and plateaus in production have become prevalent despite increasing investment in agriculture, which could mean that maximum potential yields under the industrial model of agribusiness have already occurred. Crop yields in “major cereal-producing regions have not increased for long periods of time following an earlier period of steady linear increase.”