Harvard analysts behind a new book on air quality in China see in its polluted clouds a possible silver lining, one that would address both pollution and rising emissions of climate-warming carbon dioxide: a tax on carbon.

Reports from the world’s most populous nation regularly detail the horrid air quality afflicting many of its urban areas — including the virtual shutdown of Harbin, a northeast city of 6 million, in October. There has also been ample coverage of China’s ascendancy to the top of the ranks of carbon dioxide emitters.

But what’s less well known, the analysts say, is that China in recent years has taken aggressive actions to try to improve air quality and cut greenhouse gas emissions.

In the last 10 years, China has developed the world’s largest capacity for wind power, with plans to triple that capacity by 2020. The plans also call for a threefold increase in the country’s hydropower, already the most substantial in the world, between 2005 and 2020, and a major increase in its nuclear capacity over the same period.

http://www.theguardian.com/music/2013/dec/18/jailed-pussy-riot-russian-amnesty
Russia passes amnesty law with amendment extending scope to include those arrested on Greenpeace ship

Maria Alyokhina (left) and Nadezhda Tolokonnikova, who could be released as early as Thursday if the amnesty law is passed. Photograph: Maxim Shipenkov/EPA

The Greenpeace “Arctic 30” could be home by Christmas, and the two jailed members of the punk group Pussy Riot should be released from jail in the coming days, after a wide-ranging amnesty law was passed by the Russian parliamenton Wednesday .

The Pussy Riot pair are serving a two-year sentence for hooliganism motivated by religious hatred, while the Greenpeace activists are charged with hooliganism and are currently on bail awaiting trial in St Petersburg.

The amnesty, backed by Russia‘s president, Vladimir Putin, is timed to coincide with the 20th anniversary of Russia’s constitution. It mainly concerns first-time offenders, minors and women with small children.

An amendment on Wednesday extended the amnesty to suspects in cases of hooliganism, which includes the Arctic 30, who were arrested aboard the Greenpeace ship Arctic Sunrise in September.

They were bailed by courts in St Petersburg last month but still faced trial and potential jail sentences of up to seven years. 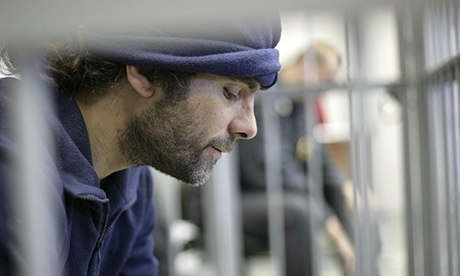 Iain Rogers, one of the Greenpeace activists, in a cage at a bail hearing in Murmansk in October. Photograph: Igor Podgorny/Greenpeace/SWNS.com

The Greenpeace activists expressed relief, though Arctic Sunrise captain Peter Willcox said: “There is no amnesty for the Arctic.”

He added: “I might soon be going home to my family, but I should never have been charged and jailed in the first place.”

A U.S. sailor scrubs the flight deck of the aircraft carrier USS Ronald Reagan to remove potential radiation contamination on March 23, 2011 while operating off the coast of Japan during Operation Tomodachi. (photo: Alexander Tidd/U.S. Navy)

“Why has this not made national headlines??? The Aircraft Carrier Ronald Reagan is nuclear powered. Radiation detection equipment did not pick up on this?? Why have these sailors and marines medical records been removed from permanent tracking. Criminal implications galore. This should be all over mainstream media. Someone please forward all these ene reports to the media…. Tepco is the lowest of snakes. Hari Kari for the lot of em!!” – Comment on enenews, August 15, 2013, by “timemachine2020”

he story referred to in the enenews.com comment above has had some coverage by Energy News, Tuner Radio Network, Stars and Stripes and a few others, but coverage, if any, by mainstream media is scant to none. All the same, it’s a real story, with real villains (TEPCO, Japanese government, U.S. Navy for starters), and real victims (a growing number of American service personnel put in harm’s way and abandoned by their government when things got tough).

The core of this story is the lawsuit filed December 21, 2012, by attorney Paul C. Garner of Brooks & Associates of Encinatas, California, on behalf of nine plaintiffs (including a one-year-old), all of whom “were among the members of the U.S. Navy crew and attached to the U.S.S. Ronald Reagan (CVN-76), whose home port was San Diego, California, when they were exposed to radiation off the coast at Fukushima prefecture, Japan, whereat the Fukushima Nuclear Power Plant is located, on and after March 11, 2011, during the mission known as ‘Operation Tomodachi.'” The complainant seeks a jury trial, but the case is still in the pre-trial stage. The plaintiffs are seeking $40 million each in damages as well as a fund of more than a billion dollars to be used for their future medical expenses.

The U.S.S. Reagan is a nuclear-powered aircraft carrier with a crew of about 5,000 that arrived off the coast of Fukushima the day after the tsunami with other ships as part of Operation Tomodachi, or “friend” in Japanese.

Author and filmmaker Danny Schechter says although the ANC’s political choices included compromises with neoliberalism, it should not used to discount Mandela’s achievements

On Reality Asserts Itself with Paul Jay, Ralph Nader says McCarthy’s reign of terror made people seek more empirical change, we went after auto companies – no “-ism” there

Turn Down the Heat: Why a 4°C Warmer World Must be Avoided

Sign up at http://www.coursera.org/course/warmer…. The course Turn Down the Heat: Why a 4°C Warmer World Must be Avoided by Kanta Kumari Rigaud and Pablo Benitez from The World Bank will be offered free of charge to everyone on the Coursera platform.

It is now becoming clear that without necessary climate action, the world may become 4°C warmer by the end of this century. As this threatens to roll back decades of development progress, this is a ‘make or break’ point. This course presents the most recent scientific evidence as well as some of the opportunities for urgent action.

On November 4, 2013, the Washington Geoengineering Consortium organized a meeting for civil society actors based in Washington DC.

The meeting brought together around 40 people from major environmental, development, and justice NGOs, to consider the challenges and opportunities presented by geoengineering technologies. There was much rich conversation throughout the day.

Here is a report summarizing and synthesizing the day’s events.

The meeting was the first in a series of consultative events that the WGC has planned. If you want to stay informed about future meetings, please add your name to our mailing list, and see our events page.