350 Or Bust: Scientists Warn Even 2°C Warming Leads To ‘Disastrous Consequences’ And Must Be Avoided

“350 Or Bust: Scientists Warn Even 2°C Warming Leads To ‘Disastrous Consequences’ And Must Be Avoided“

Humanity is choosing to destroy a livable climate, warn 18 of the world’s leading climate experts in a new study. Led by James Hansen, they make the strongest case to date for a target of 350 parts per million (ppm) of CO2 in the air, or about 1°C (1.8°F) total warming.

Yes, we are already near 400 ppm (and rising 2 ppm a year), and have warmed more than 0.8°C since preindustrial times, so the authors understand the challenge. But in their must-read article in the journal PLOS One, the scientists argue that “aiming for the 2°C [3.6°F pathway would be foolhardy” because it “would have consequences that can be described as disastrous”:

… sea level rise of several meters could be expected. Increased climate extremes, already apparent at 0.8°C warming, would be more severe. Coral reefs and associated species, already stressed with current conditions, would be decimated by increased acidification, temperature and sea level rise. More generally, humanity and nature, the modern world as we know it, is adapted to the Holocene climate that has existed more than 10,000 years.

They point that even a modest temperature rise will end the stable climate that enabled modern civilization is clear in this figure derived from another recent study: 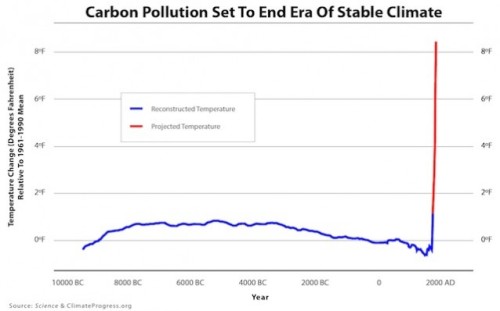 Temperature change over past 11,300 years (in blue, via Science, 2013) plus projected warming this century on humanity’s current emissions path (in red, via recent literature).

A key point of the new study — bluntly titled “Assessing ‘Dangerous Climate Change’: Required Reduction of Carbon Emissions to Protect Young People, Future Generations and Nature” — is that 2°C warming is unlikely to be stable because it “would spur ‘slow’ feedbacks and eventual warming of 3–4°C with disastrous consequences.”

As Climate Progress has previously reported, the thawing permafrost alone is projected to add as much as 1.5°F (!) to total global warming by 2100 and ocean acidification could add another 0.9°F.

The new head of Pennsylvania’s Department of Environmental Protection doesn’t think the environment needs to be protected from climate change.

“I’ve not read any scientific studies that would lead me to conclude there are adverse impacts to human beings, animals, or plant life at this small level of climate change,” Abruzzo said.

When pressed by Pennsylvania Sen. Daylin Leach (D., Montgomery) on whether he hadn’t read the numerous news stories over the years on “the immediate and drastic results of climate change on species’ diversity, on human sustainability, on deaths from air pollution, on all kinds of things,” Abruzzo conceded that he believed climate change exists, but still didn’t think it posed a major risk.

“Climate change is such a broad topic. I would say that I haven’t drawn any conclusions across the board,” he said. “I do agree that it exists, and I think that there are things that we, not only as Pennsylvanians, but we as Americans and we as citizens of the planet can do to address some of the factors that contribute to climate change.”

Pennsylvania, Abruzzo said, is already doing its “fair share” to combat climate change and didn’t need to change its policies.

Sen. Leach, the only Senate member to vote against Abruzzo, said the acting DEP head’s comments on climate change were “mind-blowing.”

“This is a reflection of what I view to be a lack of seriousness with which the governor treats environmental issues,” Leach said. “It’s just not a serious nomination.”

An alliance of corporations and conservative activists is mobilising to penalise homeowners who install their own solar panels – casting them as “freeriders” – in a sweeping new offensive against renewable energy, the Guardian has learned.

Details of Alec’s strategy to block clean energy development at every stage – from the individual rooftop to the White House – are revealed as the group gathers for its policy summit in Washington this week.

About 800 state legislators and business leaders are due to attend the three-day event, which begins on Wednesday with appearances by the Wisconsin senator Ron Johnson and the Republican budget guru and fellow Wisconsinite Paul Ryan.

This week the right-wing American Legislative Exchange Council (ALEC), an influential lobbying group composed of Republican politicians and big businesses, is hosting its “States and Nation Policy Summit” in Washington, DC. Senator Ted Cruz (R-TX) is giving the keynote, and Republican budget leaders Representative Paul Ryan (R-WI) and Senator Ron Johnson (R-WI) will also give speeches. All three are climate deniers with poor environmental records, so they will feel at home as ALEC renews its efforts in 2014 to weaken or repeal clean energy policies in states across the country.

On Tuesday, The Guardian showed how ALEC is facing a funding crisis after losing a number of members due to its policy on gun laws. In the last two years ALEC lost lost almost 400 state legislators and more than 60 corporations largely due to the group’s involvement in the Stand Your Ground law that originally allowed George Zimmerman to walk free after he killed Trayvon Martin.

The next day, the paper explained how ALEC “is mobilizing to penalize homeowners who install their own solar panels — casting them as “freeriders” — in a sweeping new offensive against renewable energy”:

“Over the coming year, ALEC will promote legislation with goals ranging from penalizing individual homeowners and weakening state clean energy regulations, to blocking the Environmental Protection Agency, which is Barack Obama’s main channel for climate action.”

Even though ALEC lost all 13 of its anti-clean energy legislative fights at the state level this year, the group is opting to up the ante in 2014 by promoting bills and resolutions targeting President Obama’s nationwide climate action plan, especially when it comes to cutting greenhouse gas emissions from power plants.

Joe Romm — Climate Progress Editor joins Bill Press to discuss a recent report by scientists that says the effects of climate change are happening faster than we thought.

At the recent International Women’s Earth and Climate Initiative Summit, Jane Goodall and Vandana Shiva discuss their decades of work devoted to protecting nature and saving future generations from the dangers of climate change. A renowned primatologist, Goodall is best known for her groundbreaking work with chimpanzees and baboons. An environmental leader, feminist and thinker, Shiva is the author of many books, including “Making Peace with the Earth: Beyond Resource, Land and Food Wars” and “Earth Democracy: Justice, Sustainability, and Peace.”

This is a rush transcript. Copy may not be in its final form.

AMY GOODMAN: We’re going to put off a debate on nuclear power that we had planned today to turn to two remarkable women, Jane Goodall and Vandana Shiva. I had the opportunity to sit down with them recently. It was right before the U.N. climate summit that took place in Poland, but we were in Suffern, New York, at the International Women’s Earth and Climate Initiative Summit. Jane Goodall, renowned primatologist, best known for her groundbreaking work with chimpanzees and baboons; Vandana Shiva, an environmental leader, feminist and thinker from India, author of many books, including Earth Democracy: Justice, Sustainability, and Peace and Staying Alive: Women, Ecology and Development. I began by, well, going back to the beginning, with each of these remarkable women, and asking Vandana Shiva, who had just flown in from India, to talk about where she was born.

Visit http://www.democracynow.org to watch the entire independent, global news hour. This is a summary of news headlines from the United States and around the world as reported by Democracy Now! on Wednesday, December 4, 2013. Visit our website to read the complete transcript, search the vast news archive, or to make a donation to support our non-profit news program.

“There Is A War On Journalism”: Jeremy Scahill on NSA Leaks & New Investigative Reporting Venture

Six months ago today, Glenn Greenwald published his first article about Edward Snowden’s leaks from the National Security Agency in The Guardian newspaper. British police are now examining whether Guardian staff should be investigated for terrorism offenses over their handling of data leaked by Snowden. Jeremy Scahill talks about the “war on journalism” around the world and his work to launch a new media venture with Greenwald, filmmaker Laura Poitras and eBay founder Pierre Omidyar.

Shell, a co-owner of the Motiva oil refinery in Port Arthur, Tex., has added climate-related carbon taxes to its long-term budgets.

WASHINGTON — More than two dozen of the nation’s biggest corporations, including the five major oil companies, are planning their future growth on the expectation that the government will force them to pay a price for carbon pollution as a way to control global warming.

“You can complain all you want about the Koch brothers, they deserve it, but it’s time we as the end consumers should be looking in the mirror too.”

The development is a striking departure from conservative orthodoxy and a reflection of growing divisions between the Republican Party and its business supporters.

A new report by the environmental data company CDP has found that at least 29 companies, some with close ties to Republicans, including ExxonMobil, Walmart and American Electric Power, are incorporating a price on carbon into their long-term financial plans.

Both supporters and opponents of action to fight global warming say the development is significant because businesses that chart a financial course to make money in a carbon-constrained future could be more inclined to support policies that address climate change.

But unlike the five big oil companies — ExxonMobil, ConocoPhillips, Chevron, BP and Shell, all major contributors to the Republican party — Koch Industries, a conglomerate that has played a major role in pushing Republicans away from action on climate change, is ramping up an already-aggressive campaign against climate policy — specifically against any tax or price on carbon. Owned by the billionaire brothers Charles and David Koch, the company includes oil refiners and the paper-goods company Georgia-Pacific.

The divide, between conservative groups that are fighting against government regulation and oil companies that are planning for it as a practical business decision, echoes a deeper rift in the party, as business-friendly establishment Republicans clash with the Tea Party.

Tom Carnac, North American president of CDP, said that the five big oil companies seemed to have determined that a carbon price was an inevitable part of their financial future.

“It’s climate change as a line item,” Mr. Carnac said. “They’re looking at it from a rational perspective, making a profit. It drives internal decision-making.”

Companies do not know what form a future carbon price would take. Congress could one day vote to directly tax emissions. President Obama is moving forward with plans to regulate carbon pollution from coal plants, with or without action from Congress — and states could carry out those regulations by taxing carbon polluters. At climate change talks at the United Nations, State Department negotiators have pledged that the United States will cut its carbon emissions 17 percent below 2005 levels by 2020, and 80 percent by 2050.

Mr. Carnac said: “Companies see that the trend is inevitable. What you see here is a hardening of that understanding.”