Warsaw paves the way for apportioning the carbon budget based on use and distribution, not scarcity | India Environment Portal

27 Nov 2013
Warsaw paves the way for apportioning the carbon budget based on use and distribution, not scarcity
By: Mukul Sanwal

Since all Parties are now going make “nationally determined contributions” towards mitigating climate change they will do so under Article 4.1 of the Convention, and the issue to be decided, by the ADP, will be what will be provided, and even more important, how these will be treated under Article 10 of the Convention – their assessment and review.

The common understanding so far is that “applicable to all” refers to these “contributions” and the separate treatment of developing and developed countries with respect to the national actions will continue. No one has suggested in these negotiations that developing countries cap their emissions in 2020. All the developed countries have already agreed in the Convention to the aim of returning their emissions to 1990 levels. So, the reporting – or communication of information – will be different.

The unresolved issue really is whether there will be an agreement to modify longer term trends (again, this is what developed countries agreed to do under the Convention in Art 4.2.a) and develop a global vision for ‘sharing responsibility and prosperity’.

A promising approach is provided in ‘The World Social Science Report 2013’, produced by the United Nations Education, Social and Cultural Organization (UNESCO), prepared jointly with the International Council for Social Science Research (ICSSR) and the Organization for Economic Co-operation and Development (OECD), which was released during the Warsaw meeting, represents a wide spectrum of opinion and concludes that “the social sciences must help to fundamentally reframe climate and global environmental change from a physical into a social problem”.

Frances Moore Lappé: Delicious Food Is Not An Indulgence—It’s a Way to Sol ve Our Ecological Crises

http://www.yesmagazine.org/issues/how-to-eat-like-our-lives-depend-on-it/choosing-deliciousness
Since I first published “Diet for a Small Planet” in 1971, the movement for food that is good for our bodies and our planet has blossomed beyond what I ever imagined. Here’s how.

I grew up in Cow Town. Or make that Fort Worth, Texas. It was the ’50s and supper was canned spinach with either meat loaf or with what my brother and I called “loose meat”—ground beef and canned mushroom soup. Iceberg lettuce and Jell-O rounded it out.

Food was not a big deal.

But when I ended up in Berkeley in the ’60s, food was a big deal. The food scene buzzed with experimentation. We rejected white-bread culture, and eating brown rice became a political statement. With stirfried veggies, what could be better? At the same time, food became my teacher: I spent long hours in the university agriculture library trying to figure out why there was so much hunger in the world. Were we really running out of food? Well, no, there was more than enough for all. I was more startled to discover that we humans are actually creating scarcity.

The global marketplace is driven by underlying economic rules that concentrate wealth and generate extreme inequality. Millions of people are too poor to pay market price for food. So grain that could feed the hungry instead becomes a raw material for a luxury product: grain-fed meat.

How illogical, how destructive! I don’t have to be part of that, I realized. It dawned on me that eating low on the food chain—a plant-centered diet—was best for others, my body, and the Earth. The ultimate win-win.

(Photo: Phil Roeder / Flickr)
I love The New York Times. As soon as it appears at my door each morning, I eagerly read the news articles and editorial comment. Yet I increasingly feel I’m being misled: by headlines that beg questions; by frequent trade-offs of hard news for marginal human interest stories; and by the sometimes long lapses between reports on an ongoing story. If the country’s premier journal misleads me, what does this say about the rest of mainstream media?

We want our news to be honest and unbiased. So we rely on headlines that accurately state the gist of the article. Consider this headline that appeared in The New York Times on September 24: “Guantanamo Hunger Strike is Largely Over, US Says.” The reader might infer that the current number of hunger strikers is insignificant or even that the Guantanamo issue is dead. Yet the article itself states that “19 of the 164 detainees” (18 percent of the 106 strikers at their peak) are still participating in the strike. It fails to mention how many of them continue to be force-fed. Wouldn’t a more accurate headline have been: “Hunger Strike Still Continues for 19 at Guantanamo?”

Or take a more recent example. The Times of November 9 carried the following headline: “Talks with Iran Fail to Produce a Nuclear Agreement.” A reader could reasonably conclude that everything is off the table and that the talks are over. But not so. The text makes clear that the negotiations are continuing, with further meetings set to resume.

The Times, sometimes places relatively personal stories on the front page, taking space that could have addressed important public issues. Case in point: the front page, headlined story “Dispute Over Gay Marriage Erupts in Cheney Family,” which appeared in the Times of November 17. Or consider the November 8, 2013 headline titled, “Prized for His Aggression, Incognito Struggled to Stay in Bounds.” Does the quarrel between two NFL linemen really warrant front page exposure?

Perhaps the most serious omissions (and failures of followup) concern US drone attacks, Guantanamo prisoners, and Israel/Iran.

On this edition for Saturday, November 30, 2013, a report from the ground zero of climate change: Barrow, Alaska where a traditional way of life is under threat from industries like shipping opened up by melting ice. Also, is healthcare.gov in shape for tomorrow’s deadline and what is at stake for the U.S. in the tensions between China and Japan over a small group of island in the East China Sea.

http://www.theguardian.com/environment/2013/nov/29/paddy-ashdown-warns-climate-change-risks-extreme-weather
The former Liberal Democrat leader says the level of energy at the UN climate talks left him ‘speechless’

Lack of action in international climate change talks risks extreme weather events such as the typhoon that devastated the Philippines three weeks ago being repeated, Paddy Ashdown has warned.

The former Liberal Democrat leader said that the level of energy at the UN climate talks, which wrapped up in Warsaw last weekend, left him “speechless.” Writing in the Guardian, Ashdown also said that climate change is contributing to extreme weather events, that the role of human-caused emissions in global warming is having fatal consequences and that typhoon Haiyan is a preview of what the future holds.

Referring to the nearly 200 countries that met last week to work towards a global deal to tackle climate change, Ashdown said: “The Philippines disaster should have sent an urgent message demanding bold action to protect children from disasters like these and delivered plans for how we can effectively rebuild when the worst happens, but the lack of energy has left me speechless.”

The talks opened with an emotive appeal from the Philippines lead negotiator, who linked the typoon to climate change and pleaded with delegates to “stop this [climate] madness.” Yeb Sano also fasted for the fortnight-long talks, prompting a petition that attracted nearly three quarters of a million signatures, calling for “major steps” at the talks. The negotiations ended with an agreement that governments would lay out their targets for future emissions cuts in just over a year’s time, as part of efforts to secure an international deal at the end of 2015, at talks in Paris.

Far from being isolated, the Philippines typhoon Haiyan followed other extraordinary meteorological events that are becoming more frequent and increasingly severe 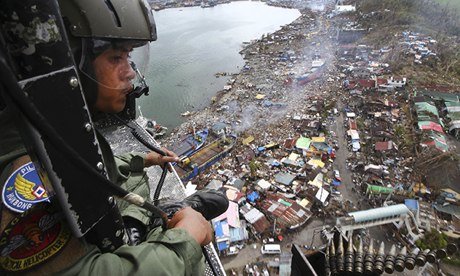 A Philippine Air Force crewman looks out from his helicopter over the typhoon Haiyan-ravaged city of Tacloban. Photograph: Dita Alangkara/AP

Three weeks ago the most powerful typhoon ever recorded to hit land destroyed parts of the Philippines. The devastation has been catastrophic, flattening homes, schools and hospitals and leaving thousands dead and 5.5 million children affected.

Unicef has worked in the Philippines since 1948 and experienced staff returning from the worst affected areas such as Leyte are reporting having never seen anything like this – not even after the Asian tsunami on Boxing day almost a decade ago. They have seen hundreds of kilometres of coconut groves literally blown away by 300kph winds. A coconut tree takes 12 years to grow, so this is a decade of livelihoods wiped out in a single storm.

I am incredibly concerned about the children who are without a doubt the most vulnerable right now. But as the immediate shock of the typhoon news reports begin to fade from people’s memories we need to address with energy and decision the true facts behind the intensity of the Philippines typhoon.

If the Philippines typhoon was an isolated incident, it would be a meteorological phenomenon, but the real worry is that far from being isolated, these events are both frequent and increasingly severe. This typhoon comes on top of other extraordinary meteorological events that have occurred recently; unprecedented floods caused by a cyclone in Sardinia last week; unprecede