“Here’s the single most important thing you need to know about the IPCC (Intergovernmental Panel on Climate Change) report: It’s not too late. We still have time to do something about climate disruption. The best estimate from the best science is that we can limit warming from human-caused carbon pollution to less than 3.6 degrees Fahrenheit – if we act now. Bottom line: Our house is on fire. Rather than argue about how fast it’s burning, we need to start throwing buckets of water.” – Michael Brune, Director, Sierra Club, Sept. 27, 2013

Sustainability and Religion: New Directions in Research and Practice 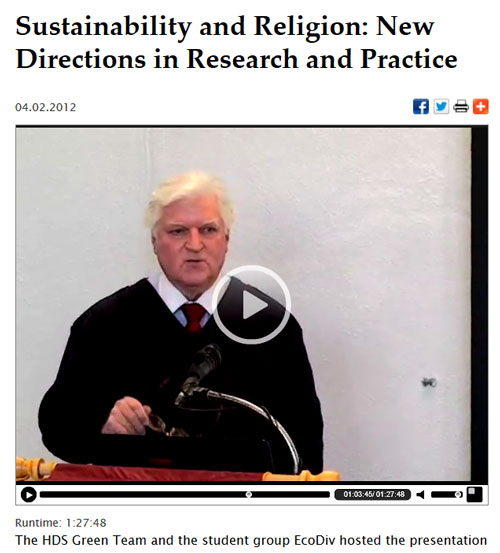 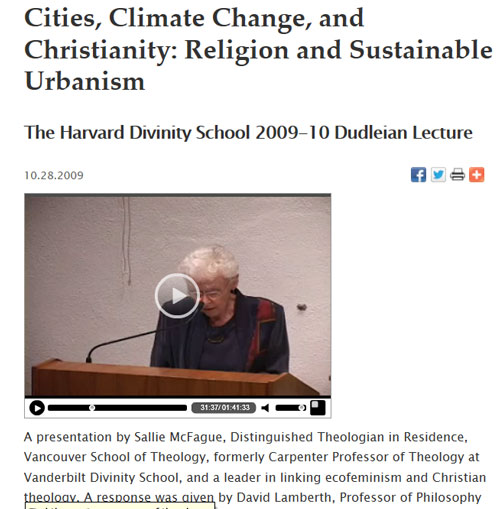 Bill McKibben – Reality Check: How the Facts of Life on a Tough New Planet Shape Our Choices 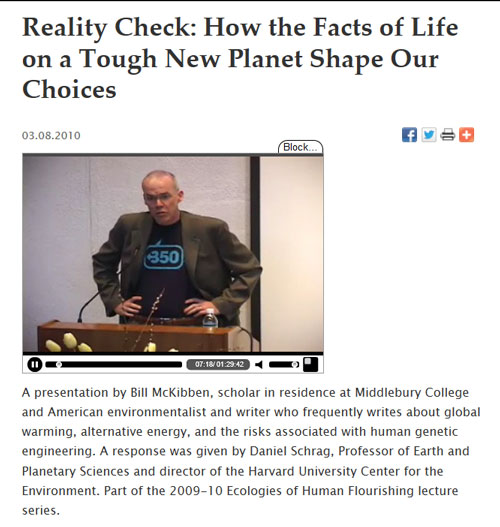 A presentation by Bill McKibben, scholar in residence at Middlebury College and American environmentalist and writer who frequently writes about global warming, alternative energy, and the risks associated with human genetic engineering. A response was given by Daniel Schrag, Professor of Earth and Planetary Sciences and director of the Harvard University Center for the Environment. Part of the 2009-10 Ecologies of Human Flourishing lecture series.

In the 2007 United Nations report on climate change, the overall assessment was “unequivocal” confidence that global warming is underway and 90 percent certainty that human activities are the cause. However, recent updates of the 2007 report spell out a more daunting scenario. The worst-case projections are being realized, leading to an increasing risk for abrupt and irreversible climatic shifts. In other words, the dreaded tipping point is now a realistic possibility. In December 2009, the world leaders gathered in Copenhagen to devise an international treaty that must surely be one of the most complicated and difficult ever attempted.

The twin of climate change—the economic meltdown—also faces us. These two are the product of the same insatiable desire for more: more money, more energy. Uncontrolled greed underlies both of these planetary disasters. Thomas Friedman, writing in The New York Times last spring, put it this way:

What if the crisis of 2008 represents something much more fundamental than a deep recession? What if it’s telling us that the whole growth model we created over the last 50 years is simply unsustainable economically and ecologically and that 2008 was when we hit the wall—when Mother Nature and the market both said: “No more.” What if we face up to the fact that unlike the U.S. government, Mother Nature doesn’t do bailouts?1

There are many needed responses to such news, but here I will attempt just one—an exercise in “thinking differently” about nature, our place in it, and particularly urbanized nature. Most human beings of the twenty-first century will live in cities, and cities are where half of the world’s greenhouse gases are generated. What is the relationship between cities and nature, and how can we achieve sustainable cities?

“A GIANT ASTEROID HEADING TOWARDS EARTH!”

Burt Hamner is launching his second micro-hydropower company to capture nature’s energy for USB batteries. His goal is to help 100 million people living off grid near flowing water. He has 20 years experience in international development and clean technologies and loves to work with students and local communities.

Natural Buildings for Urban Living (part 1) from Peak Moment TV. Like this? Watch the latest episode of Peak Moment TV on Blip! http://blip.tv/peak-moment-tv/watch

Wanting to demonstrate that “cities can be less impactful on the planet,” natural builder Lydia Doleman bought and remodeled a Portland house to demonstrate her values. Composting toilets reduce water usage while feeding the soil. Growing food shortens dependencies. Building materials were recycled and/or less toxic. She revised the floor plan to create spaces which encourage shared living rather than separate spaces. She also built a cob studio and Portlandapos;s first permitted straw bale residence. Take a tour with Lydia in Episode 247. Episode 246. [theflyinghammer.com]

Like this? Watch the latest episode of Peak Moment TV on Blip! http://blip.tv/peak-moment-tv/watch