https://www.facebook.com/MediaMayhem
https://twitter.com/ahopeweiner
http://thelip.tv/
In this Media Mayhem REMIX on YouTube, “Collapse,” and “Crossing the Rubicon,” Author Michael Ruppert discusses how the Bush/Cheney White house orchestrated 9/11 to create a reason to invade Iraq for their oil.

https://www.facebook.com/MediaMayhem
https://twitter.com/ahopeweiner
http://thelip.tv/
Michael Ruppert let’s fly with both barrels as he speaks on Peak Oil, who the media are serving, and the truth behind Pat Tilman and Christopher Dorner. Ruppert’s candor is so strong that it is clear to see why he has been persecuted for his journalism, and he also shows why he is resilient enough to keep on speaking his truth.

GUEST BIO:
Michael Ruppert is an investigative journalist and author of two books, Crossing the Rubicon: The Decline of the American Empire at the End of the Age of Oil and Confronting Collapse: The Crisis of Energy and Money in a Post Peak Oil World. In the 1970s, Ruppert was a narcotics officer for the LAPD. While there, he discovered evidence that the CIA was complicit in the illegal drug trade. He alerted his superiors with this information and soon found himself dismissed even though he had an honorable record. These events spurred Ruppert to begin a new career for himself as an investigative journalist. He was the publisher/editor of the From The Wilderness newsletter which, until its closure in 2006, examined government corruption and complicity in such areas as the CIA’s involvement in the war on drugs, the Pat Tillman scandal, the 2008 economic collapse and issues surrounding Peak Oil. Ruppert has lectured widely on these topics and was the subject of a documentary,Collapse, in 2009 which was based on one of his books. Currently, he hosts the radio show, The Lifeboat, on the Progressive Radio Network.

EPISODE BREAKDOWN:
00:01 Coming up on Media Mayhem.
00:50 Welcoming Michael Ruppert
01:44 Getting persecuted as a journalist over Pat Tilman.
04:35 Bringing down the Bush administration.
08:55 The Pat Tilman cover-up.
15:01 Getting push back from controversial stories.
23:14 Media red herrings and distractions from the Right and Left.
27:54 Collapse, peak oil and the Iraq War explained.
36:17 The cognitive dissonance swirling around Christopher Dorner.
45:04 Investigative journalism appears through the cracks.

Obama signed the “Monsanto Protection Act” into law and we look into his connection to Monsanto with Tyrel Ventura and Tabetha Wallace on Buzzsaw.

Today we’re calling on President Obama to issue an executive order to call for the mandatory labeling of genetically engineered foods. Not only is GMO labeling a reasonable and common sense solution to the continued controversy that corporations like Monsanto, DuPont and Dow Chemical have created by subverting our basic democratic rights, but it is a basic right that citizens in 62 other countries around the world already enjoy, including Europe, Russia, China, India, South Africa and Saudi Arabia.
Join us in demanding mandatory labeling of GMO foods. Now’s the time!

Seeds Of Death is a Gary Null Production all rights belong to him. The truth belongs to all of us!

The leaders of Big Agriculture–Monsanto, DuPont, Syngenta–are determined that world’s populations remain ignorant about the serious health and environmental risks of genetically modified crops and industrial agriculture. Deep layers of deception and corruption underlie both the science favoring GMOs and the corporations and governments supporting them.

This award-winning documentary, Seeds of Death, exposes the lies about GMOs and pulls back the curtains to witness our planet’s future if Big Agriculture’s new green revolution becomes our dominant food supply. 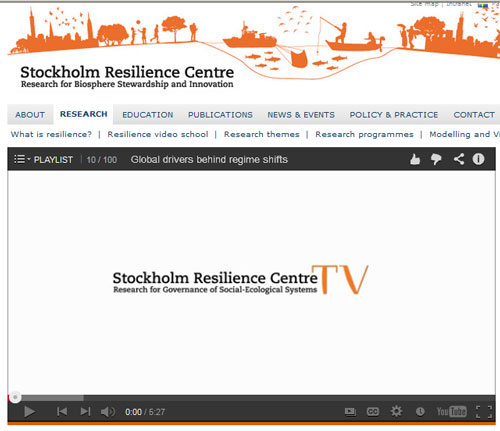 With most publications and debates on ecosystem services in urban areas conducted in English, a new report written in Swedish aims to make the concept more readily available to urban planners and other practitioners in Sweden. Photo: S. Zeff/Azote

“Publications and debates about ecosystem services are often very research oriented but rarely make connections to urban environments directly. Furthermore, they are almost always in English. We saw a great need to produce a report in Swedish that connects ecosystem services to the city and is available to more people,” says Johan Colding.