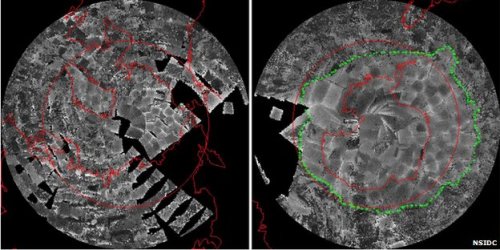 The earliest satellite maps of Arctic and Antarctic sea-ice have been assembled by scientists.

They were made using data from Nasa’s Nimbus-1 spacecraft, which was launched in 1964 to test new technologies for imaging weather systems from orbit.

The satellite’s old pictures have now been re-analysed to determine the extent of the marine ice at the poles in the September of that year.

Regular mapping from space did not begin until 1978.

One key finding is that marine floes around the White Continent in the 1960s were probably just as extensive as they are today.

The new snapshot, published in The Cryosphere journal, therefore helps put current ice conditions into a longer-term context, say researchers at the US National Snow and Ice Data Centre (NSIDC).

It is also just a fascinating story of how old scientific data can be given a new lease of life. ….(read more).