U.S. to Clean Up Agent Orange in Vietnam

Fifty years after U.S. warplanes first sprayed a chemical weapon, known as Agent Orange, on Vietnam’s jungles to destroy enemy cover, America is helping clean up one of the most contaminated sites – Danang airport. (April 24)

The Basics of EndNote Basic

An introduction to using the free version of EndNote Basic, with a short section at the end on extra features available in EndNote Basic when used with EndNote.

The earliest satellite maps of Arctic and Antarctic sea-ice have been assembled by scientists.

They were made using data from Nasa’s Nimbus-1 spacecraft, which was launched in 1964 to test new technologies for imaging weather systems from orbit.

The satellite’s old pictures have now been re-analysed to determine the extent of the marine ice at the poles in the September of that year.

Regular mapping from space did not begin until 1978.

One key finding is that marine floes around the White Continent in the 1960s were probably just as extensive as they are today.

The new snapshot, published in The Cryosphere journal, therefore helps put current ice conditions into a longer-term context, say researchers at the US National Snow and Ice Data Centre (NSIDC).

It is also just a fascinating story of how old scientific data can be given a new lease of life. ….(read more).

Dung beetles and their effects on soil | ManagingWholes.com

Summary: Favored by managed grazing, dung beetles in Oklahoma buried about 1 ton of wet manure per acre per day (2 metric tons/ha). This increased water infiltration an average of 129% on studied plots. Each extra inch (25 mm) of water absorbed adds 27,225 gallons/acre (254,530 l/ha) of water to the soil, reducing both flooding and drought.

Healthy soil is an extremely complex civilization of living organisms. We humans often ignore using soil organisms as a tool, because they are so small, so easily out of sight and out of mind. Yet, healthy soil is the corner stone of diversity and health for both plants and animals.

On pasture and rangeland grazed by livestock, the dung beetle is a soil organism that is visible to humans, beneficial to soil health and easily monitored. They are valuable as a soil restoration tool to increase organic matter, aerate, remove non-point source pollution, increase water infiltration, and help control pest insects. They work for free and love their work. The only consideration needed is to not use insecticides/parasiticides that poison them. 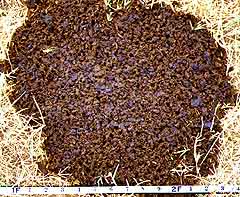 13 hours later, after being worked by O. gazella dung beetles. 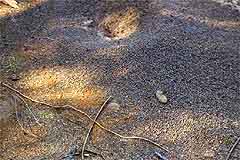 http://www.ted.com – In Al Gore’s brand-new slideshow (premiering exclusively on TED.com), he presents evidence that the pace of climate change may be even worse than scientists were recently predicting, and challenges us to act with a sense of “generational mission” — the kind of feeling that brought forth the civil rights movement — to set it right. Gore’s stirring presentation is followed by a brief Q&A in which he is asked for his verdict on the current political candidates’ climate policies and on what role he himself might play in future.

Antarctica’s Feeling the Heat. Are We?

The CO2 levels Peter Ward measured on a recent trip to Antarctica left him with a bleak view of the future of the planet.

The biologist and paleontologist remembers “the smartest man [he’s] ever known.”

An interview with the biologist and paleontologist at the University of Washington in Seattle.

250 million years ago, long before dinosaurs roamed the Earth, the land and oceans teemed with life. This was the Permian, a golden era of biodiversity that was about to come to a crashing end. Within just a few thousand years, 95% of the lifeforms on the planet would be wiped out, in the biggest mass extinction Earth has ever known. What natural disaster could kill on such a massive scale? It is only in recent years that evidence has begun to emerge from rocks in Antarctica, Siberia and Greenland.

The demise of the dinosaurs, 65 million years ago (at the so-called K/T boundary), was as nothing compared to the Permian mass extinction. The K/T event killed off 60% of life on Earth; the Permian event 95%. Geological data to explain the destruction have been hard to find, simply because the rocks are so old and therefore subject to all kinds of erosion processes. It seems plausible that some kind of catastrophic environmental change must have made life untenable across vast swathes of the planet.

In the early 1990s, the hunt for evidence headed for a region of Siberia known as the Traps. Today it’s a sub-Arctic wilderness but 250 million years ago, over 200,000km&sup2; of it was a blazing torrent of lava. The Siberian Traps were experiencing a ‘flood basalt eruption’, the biggest volcanic effect on Earth. Instead of isolated volcanoes spewing out lava, the crust split and curtains of lava were released. And the Siberian flood eruption lasted for millions of years. Could volcanic activity over such a long time alter the climate enough to kill off 95% of life on Earth?

Vincent Courtillon used a much smaller flood basalt eruption, in Iceland in 1783, as the basis for some calculations. Writing in the 18th century, Benjamin Franklin (then American Ambassador in Paris) described 1784 as a year without a summer. Ash from the eruption blacked out the sky and crops failed across Europe. Courtillon extrapolated the climatic impact of the Siberian Trap eruption from the records of the Icelandic event. He deduced that a ‘nuclear winter’ lasting decades would be followed by rapid global warming due to the increased level of greenhouse gases in the post-eruption atmosphere.

Vincent believes the disruption of cooling followed by warming could cause the Permian extinction but other geologists disagree. Peter Ward returned to the Siberian Trap data to estimate the amount of carbon dioxide – and global warming – that could result. His worst case scenario is a temperature rise of 5°C, enough to kill off many species but not the 95% wipeout that ended the Permian.

If the Siberian eruptions were not deadly enough, what other effects might be at work? To try to answer that, Michael Rampino set out to establish an even more fundamental piece of data: how long did the extinction take? He studied rock sedimentation rates in the Alps and concluded that the Permian killer had stalked the planet for just 8,000-10,000 years, far less than had been thought. His mind turned to ways of causing such catastrophic destruction in – on geological timescales – the blink of an eye. He wanted to explore the possibility of a meteorite strike.