http://www.democracynow.org – As many as one in 10 Americans cannot get internet connections fast enough for common online activities, such as watching video. Many communities have responded to this “digital divide” by creating their own municipal broadband networks as an alternative to the slow services offered by cable and telephone companies — in order to gain equal access to education, healthcare, and even jobs. One example of success is a Thomasville, Georgia, which has been connecting people for more than a decade. But these efforts could soon be blocked. Some 19 states have passed laws to stop these communities from making such investments, and Georgia could be next. We are joined by Chris Mitchell, director of the Telecommunications as Commons Initiative at the Institute for Local Self-Reliance. He recently co-authored a report, “The Empire Lobbies Back: How National Cable and DSL Companies Banned The Competition in North Carolina.” Catharine Rice is the president of the SouthEast Association of Telecommunications Officers and Advisors, which represents Georgia, North Carolina, South Carolina and Tennessee. She led the effort to block an industry-sponsored on municipal broadband investment in North Carolina, which passed last year after Republicans came to power in the state, including a longtime friend of the Koch brothers, Art Pope, who is now the governor’s budget director.

http://www.democracynow.org – In late January, it became illegal for cell phone users to unlock their phones for use on a different carrier. “It’s a very weird regulation that now makes it illegal for us do this really commonplace technology with our own devices,” says former Republican staffer Derek Khanna. He helped spearhead an online petition against the ban, which has drawn more than 114,000 signatures, gathering wide support from several political corners and prompting an investigation by the Federal Communications Commission. We speak to Khanna and Darcy Burner.

http://www.democracynow.org – The Freedom to Connect Conference has attracted people from across the political spectrum, including Derek Khanna, a “rising star” in the Republican party, who has worked on both of Mitt Romney’s presidential campaigns. Khanna wrote a policy brief for the Republican Study Committee entitled, “Three Myths About Copyright Law and Where to Start to Fix It.” In it, he advocated lighter penalties for copyright infringement and an expansion of fair use, arguing that current copyright law hinders progress and runs against Constitutional principles. The day after it was released, the committee retracted the report, reportedly after pressure from the entertainment industry and politicians. Khanna then lost his job. He joins us in conversation with former Democratic Congressional candidate Darcy Burner to talk about why copyright reform transcends partisan politics.

http://www.democracynow.org – We broadcast live from the Freedom to Connect conference, a national gathering to promote internet freedom and universal connectivity. It comes as the controversial Cyber Intelligence Sharing and Protection Act has been reintroduced in the House, calling for a”cybersecurity” exception to existing privacy law that would give immunity to companies that hand over troves of confidential customer records and communications to the National Security Agency, FBI and Department of Homeland Security. Last year at this same conference, Aaron Swartz, the late cyber activist, computer programmer, social justice activist and writer who committed suicide earlier this year, gave the keynote address, in which he described the battle to defeat the Stop Online Piracy Act, or SOPA. Swartz took his own life at the age of 26 just weeks before he was to go on trial for using computers at the Massachusetts Institute of Technology to download millions of copyrighted academic articles from JSTOR, a subscription database of scholarly papers. JSTOR declined to press charges, but prosecutors moved the case forward. Swartz faced up to 35 years in prison and a million dollars in fines for allegedly violating the Computer Fraud and Abuse Act. After his death federal prosecutors dropped the charges. We are joined by Darcy Burner, who opens today’s conference with her “After Aaron” address. She worked with him on several projects, including ProgressiveCongress.org, which she formerly directed, as well as the Progressive Congress Action Fund. She is also one of the biggest self-described geeks to run for U.S. Congress, having run for office three times in Washington State.

Extreme Realities will be a new episode in the PBS prime-time environmental series, Journey to Planet Earth. It’s a documentary for all those who care about the future of our planet, our children, and future generations.

About 20 years ago we became interested in environmental films after the Secretary General of the United Nations Earth Summit asked us to produce a short documentary about the environmental challenges facing our planet. It was to be shown to the 157 heads of state who attended the first Earth Summit Conference in Rio de Janeiro.

At the time we knew very little about environmental science, but we did know how to tell stories. We had just finished a five-year stint producing three feature films and were looking to apply these story-telling techniques to documentary filmmaking. Though our colleagues thought we were crazy to give up a highly successfully theatrical career, Hollywood just didn’t seem to be satisfying enough — we’re both knee jerk liberals interested in issues.

After the success of our Earth Summit project, we had, what some would call, an epiphany. We realized that telling people about the perils of climate change was the most fulfilling and challenging thing we had ever done. This convinced us to develop a television series we decided to call Journey to Planet Earth.

However, twenty years and 22 countries later we were just about ready to call it a day. We felt it was time to move on to new projects and new issues; we simply felt we had told the story. But then we discovered there was one more issue that we never really touched upon. So we decided to produce a final episode in our series. We call it Extreme Realities.

Just pick up any newspaper or watch any television news report and it becomes evident that unprecedented extreme weather events such as severe drought and heat waves, more intense hurricanes, increased tornado and wildfire activity, and crippling blizzards are leaving a trail of death and destruction throughout the world. 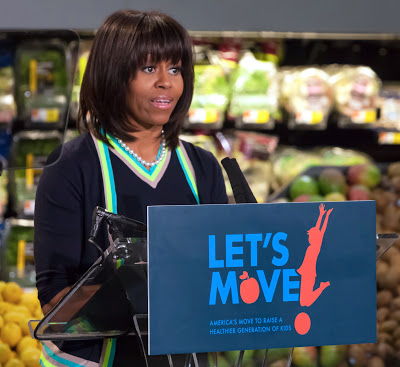 During Missouri visit, First Lady praises the company’s commitment to Let’s Move!, and calls for more companies to follow suit…
*Update note at bottom
Springfield, Missouri – “We need more American companies to stand up and do what Walmart has done,” First Lady Michelle Obama declared on Thursday afternoon as she made her first official visit to a Walmart store since the company partnered with the Let’s Move! campaign in 2011 with an extensive five-year commitment. During the last stop on her third anniversary tour for her childhood obesity initiative, Mrs. Obama declared the company’s work “groundbreaking,” the same adverb she used to describe the pledge when she first joined executives in Washington, DC, to announce the partnership. (Above, during her remarks)

Noam Chomsky Glenn Greenwald with Liberty and Justice For Some

Former constitutional rights lawyer Glenn Greenwald contends that the United States has a two-tiered judicial system, one for the “haves” and one for the “have-nots.” Mr. Greenwald presents his argument by tracing the evolution of judicial inequality, from President Richard Nixon’s pardon for the Watergate scandal to what the author deems were economic and political crimes committed during the George W. Bush administration. The author posits that both political parties and the media are culpable for creating an unequal judicial system. Glenn Greenwald presented his thoughts in conversation with political activist Noam Chomsky. They also responded to questions from members of the audience. This was a special event of the Harvard Book Store, held at the Brattle Theatre in Cambridge, Massachusetts.