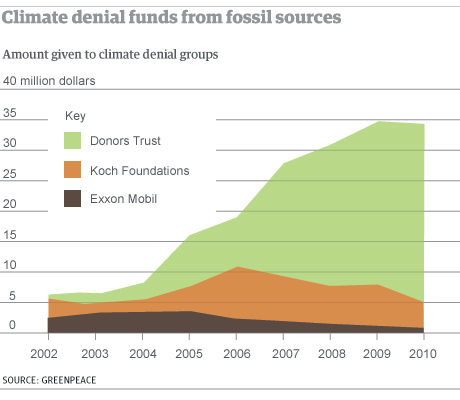 There’s broad scientific consensus that climate disruption is human-induced, yet global warming is still hotly debated. Suzanne Goldenberg joins host Steve Curwood to discuss her recent article in the UK newspaper The Guardian. It investigated the anonymosly funded Donor’s Trust and Donor’s Capital Fund which together have given over $100 million dollars to climate change denial groups in the United States over the past decade.

CURWOOD: The 2012 US presidential election was the most expensive in history, and much of the six billion dollars spent came from undisclosed donors. There’s no question that secret money is powerful and influential in American public life – and not just on electoral races. A recent investigation by the UK newspaper, The Guardian, revealed that over the past decade a pair of anonymous donor funds gave over $100 million dollars to US groups that deny a human role in climate change. Suzanne Goldenberg, the US environment correspondent for The Guardian conducted the probe, and she joins us now.

GOLDENBERG: Donors Trust and Donor’s Capital Fund are two vehicles which were put together for the express purpose of channeling donations from conservative donors to conservative groups. They have tax advantages for wealthy donors, but the other thing they offer their clients is an assurance the money won’t be diverted to liberal causes, and complete anonymity. So they don’t have to become known as the benefactors of these causes.

CURWOOD: How much money we talking about here? (read more)