On Friday, February 15, 2013, The Safe Climate Caucus held its first press conference before going to the House floor to make speeches on the effects of climate change.

A top secret branch of China’s military is being accused of being behind cyber attacks on companies all over the world. An American computer security firm says the group of hackers, also known as Unit 61398, has been operating over the past seven years to steal information. The Chinese government, however, denied their involvement in the global hacking operation reportedly based in Shanghai. Al Jazeera’s Gerald Tan reports.

To watch the entire interview with Suzanne Goldenberg on Democracy Now!, visit http://owl.li/hR5Vz. The right-wing Donors Trust secretly funds a network of groups dedicated to challenging the science of global warming and climate change. Appearing Fox News on Monday, the Donors Trust-funded pundit Marc Morano of the website Climate Depot warned that opponents of the Keystone XL could resort to “eco-terrorism.” Morano cited as their inspiration the NASA Climatologist James Hansen. Democracy Now! speaks with Suzanne Goldenberg, a Guardian reporter who has extensively covered Donors Trust’s support for climate denial.

To watch the entire interview with John Dunbar on Democracy Now!, visit http://owl.li/hRayr. Since 1999, the non-profit charity Donors Trust has handed out nearly $400 million in private donations to more than 1,000 right-wing and libertarian groups. The fact it has been able to quietly do so appears to explain why it exists: Wealthy donors can back the right-wing causes they want, without attracting public scrutiny. Democracy Now! speaks to John Dunbar, politics editor at The Center for Public Integrity, and co-author of the group’s months-long investigation into Donor’s Trust.

Democracy Now!, is an independent global news hour that airs weekdays on 1,100+ TV and radio stations Monday through Friday. 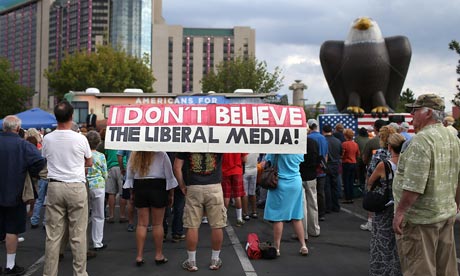 Conservative billionaires used a secretive funding route to channel nearly $120m (£77m) to more than 100 groups casting doubt about the science behind climate change, the Guardian has learned.

The funds, doled out between 2002 and 2010, helped build a vast network of thinktanks and activist groups working to a single purpose: to redefine climate change from neutral scientific fact to a highly polarising “wedge issue” for hardcore conservatives.

The millions were routed through two trusts, Donors Trust and the Donors Capital Fund, operating out of a generic town house in the northern Virginia suburbs of Washington DC. Donors Capital caters to those making donations of $1m or more.

While the secretive Donors Trust has given millions to a variety of right-wing causes, denying climate change appears to be its top priority. An analysis by the environmentalist group Greenpeace reveals Donors Trust has funneled more than one-third of its donations — at least $146 million — to more than 100 climate change denial groups over the past decade. In 2010, 12 of these groups received between 30 to 70 percent of their funding from Donors Trust. We’re joined by Suzanne Goldenberg, U.S. environment correspondent for The Guardian, who has written a series of articles detailing the ties between Donors Trust and opponents of climate change science. “The goal here is to create this illusion, this idea that there is a really strong movement against the science of climate change and against action on climate change,” Goldenberg says. “In fact, that’s actually, to an extent, become a reality now: You see that opposition to action on climate change is central to Republican thinking.” [includes
rush transcript]

Suzanne Goldenberg, U.S. environment correspondent for The Guardian who has covered the ties between Donors Trust and global warming denial.

John Dunbar, politics editor at the Center for Public Integrity. He worked on the months-long investigation into the Donors Trust called “Donors Use Charity to Push Free-Market Policies in States.”

Changing the Way We Eat

About Changing the Way We Eat