For Full Sequence of 23 parts start by clicking here and then at the end of each segment, the next will load automatically:

1. The Corporation is today’s dominant institution, creating great wealth but also great harm. This 26 award-winning documentary examines the nature, evolution, impacts and future of the modern business corporation and the increasing role it plays in society and our everyday lives.

The Largest Climate Rally in History: February 17, 2013 on the National Mall in Washington, D.C. RSVP today or find more info at ForwardOnClimate.org. Presented by 135 different organizations and their members, including 350.org, the Sierra Club, the Hip Hop Caucus, Greenpeace, the Chesapeake Climate Action Network, Green For All and Forecast the Facts.

Ignoring Climate Change When It Stares You in the Face

NBC Nightly News (1/12/13) asked a serious question the other night–and then gave a not-so-serious answer.

When roses are blooming in January in New York City, maybe you should start thinking about climate change. (Photo: Jim Naureckas)

Anchor Lester Holt remarked at the top of the broadcast:

To answer the question, he turned to correspondent Kristen Dahlgren, who went to the Weather Channel‘s Greg Postel, who gave this explanation:

A very strong dip in the jet stream has placed itself over the western part of the country and that’s allowed some very cold air from Canada to move southward.

That’s true as far as it goes–but it didn’t go any farther. Specifically, it never mentioned climate change–something that has been linked to disruptions in the jet stream’s traditional path. As the blog ClimateSight (12/19/12) explained: ….(read more).

Bernard Lietaer & Jacqui Dunne, co-authors, Rethinking Money join Thom Hartmann. During the past four decades – there have been around 10 countries experiencing some kind of financial or monetary crisis each year. Could turning to alternative currencies help relieve some of the burden that nations are facing today – and improve the global economic outlook?

Shutterstock  Presidential decisions often turn out to be far less significant than imagined, but every now and then what a president decides actually determines how the world turns. Such is the case with the Keystone XL pipeline, which, if built, is slated to bring some of the “dirtiest,” carbon-rich oil on the planet from Alberta, Canada, to refineries on the U.S. Gulf Coast. In the near future, President Obama is expected to give its construction a definitive thumbs up or thumbs down, and the decision he makes could prove far more important than anyone imagines. It could determine the fate of the Canadian tar-sands industry and, with it, the future well-being of the planet. If that sounds overly dramatic, let me explain.

Sometimes, what starts out as a minor skirmish can wind up determining the outcome of a war — and that seems to be the case when it comes to the mounting battle over the Keystone XL pipeline. If given the go-ahead by President Obama, it will daily carry more than 700,000 barrels of tar-sands oil to those Gulf Coast refineries, providing a desperately needed boost to the Canadian energy industry. If Obama says no, the Canadians (and their American backers) will encounter possibly insuperable difficulties in exporting their heavy crude oil, discouraging further investment and putting the industry’s future in doubt.

The battle over Keystone XL was initially joined in the summer of 2011, when environmental writer and climate activist Bill McKibben and 350.org, which he helped found, organized a series of non-violent anti-pipeline protests in front of the White House to highlight the links between tar-sands production and the accelerating pace of climate change. At the same time, farmers and politicians in Nebraska, through which the pipeline is set to pass, expressed grave concern about its threat to that state’s crucial aquifers. After all, tar-sands crude is highly corrosive, and leaks are a notable risk. …(read more)…

Playing Golf as the Planet Burns: Obama Meets With Oil-Man as Protesters Call for Halt to Keystone Pipeline | Alternet

This article was published in partnership with GlobalPossibilities.org.

In parallel universes, President Obama spent his Sunday playing golf at an exclusive Florida gated community while 50,000 Americans poured into Washington DC, calling on the absent president to stop the Keystone XL Pipeline and stand up to Big Oil. In an inspiring rally, indigenous women from the United States and Canada told the crowd how the tar sands and its infrastructure—from Northern Alberta where the oil is extracted to Texas where the Keystone pipeline is under construction—are threatening communities across North America. Canadian indigenous activist Crystal Lameman described how fish in northeastern Alberta have cancerous tumors, moose have “puss bubbles under the skin” and babies are airlifted to the hospital for drinking contaminated water. …(read more). 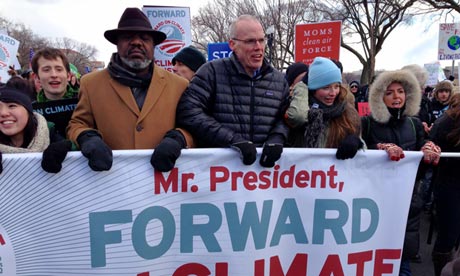 Protesters of the Keystone XL pipeline project were bussed in from 30 states and Canadian provinces. Photograph: James Fassinger for the Guardian

Thousands of protesters descended on Washington DC on Sunday demanding Barack Obama shut down the Keystone XL pipeline project to show he is serious about taking action on climate change.

Organisers said a crowd of 35,000, carrying placards in the shape of bright red stop signs, gathered at the Washington monument on a bright but bitterly cold day for the march on the White House.

The event, billed as the largest climate protest in US history, was intended as a show of force before Obama renders his decision on the pipeline project in the next few months.

Protesters were bussed in from 30 states and Canadian provinces. Marchers held aloft banners proclaiming “Don’t be fossil fools” and “It’s time to cut carbon” during the rally.

The DC event was accompanied by smaller one in cities including Austin, during which protesters chanted that the president had “sold out Texas” over the pipeline. …(read more).