DC guessing game: Who will replace Lisa Jackson at EPA?

Lisa Jackson’s decision to step down as administrator of the Environmental Protection Agency sets off a Washington guessing game over who President Barack Obama will pick to replace her.

Jackson’s move is not a surprise; she has been a lightning rod for criticism lobbed by Republicans and oil industry leaders who insist the EPA has too aggressively tried to regulate pollution from drilling, refining and burning fossil fuels.

Any EPA administrator — including Jackson — also is subject to criticism for weakening environmental protections or going too slowly to advance new safeguards.

During Jackson’s tenure, congressional aides sometimes joked that the EPA head spent more time on Capitol Hill than the lawmakers who frequently called her to testify.

The next EPA administrator is likely to oversee high-profile policy governing greenhouse gas emissions from power plants and refineries and low-sulfur transportation fuel. The agency could play a key role in regulating the use of hydraulic fracturing technology being used to unlock natural gas and oil previously trapped in dense rock formations.

Any potential replacement — no matter how well liked — could be in for a tough confirmation battle, as senators use debate over the nominee to highlight their opposition to the Obama administration’s environmental policies.

“The Republicans may use this opportunity to squeeze commitments from the president to weaken public health protections he put in place during the first term.”

Here is a look at some of the contenders:

This video exposes yet another of Obama’s radical leftist appointments, EPA head Lisa Jackson. – http://thelibertyjournal.com/2010/02/… – From indoctrination of our youth through the Boy’s and Girl’s Clubs of America, to fear mongering in a speech to LULAC, to playing the race card in front of BIG (Blacks in Government), Jackson covers all the Environmental Justice bases. Learn more about the real goals of Environmental Justice and the scam of man-made global warming @ http://thelibertyjournal.com, where the progressive agenda is being exposed.

Robert D. Bullard has been described as the nation’s leading authority on race and the environment. In this presentation from UC Santa Barbara, Bullard takes a look at the connection between human rights and the politics of pollution. Series: Voices [8/2006] [Public Affairs] [Show ID: 11878]

EVENT: Extreme Weather in a Changing Climate: Past, Present and Future

See also: What You Need to See to Understand Blizzard ‘Nemo’

On Feb. 17th, Greenpeace will join thousands of concerned Americans including our friends at Sierra Club, 350, the Hip Hop Caucus and dozens of other people-powered organizations to demand true progress for our country and our planet.

Scientists identify security risks from climate change, and recommend investments in monitoring and forecasting to prepare for growing threats

Increasingly frequent extreme weather events such as droughts, floods, severe storms, and heat waves have focused the attention of climate scientists on the connections between greenhouse warming and extreme weather.  Because of the potential threat to U.S. national security, a new study was conducted to explore the forces driving extreme weather events and their impacts over the next decade, specifically with regard to their implications for national security planning. The report finds that the early ramifications of climate extremes resulting from climate change are already upon us and will continue to be felt over the next decade, directly impacting U.S. national security interests. “Lessons from the past are no longer of great value as a guide to the future,” said co-lead author Michael McElroy, Gilbert Butler Professor of Environmental Studies at Harvard University. “Unexpected changes in regional weather are likely to define the new climate normal, and we are not prepared.” ….(more). 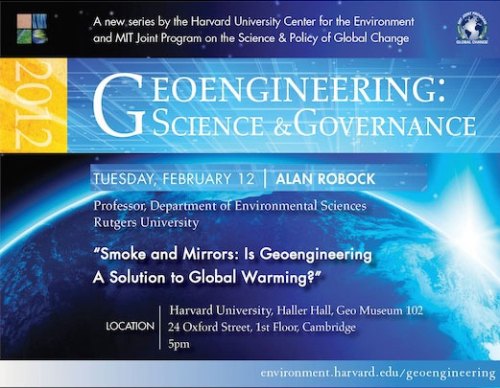 “Smoke and Mirrors:  Is Geoengineering a Solution to Global Warming?” with Alan Robock, Department of Environmental Sciences, Rutgers University

ABSTRACT: In response to the global warming problem, there has been a recent renewed interest in geoengineering “solutions” involving “solar radiation management” by injecting particles into the stratosphere, brightening clouds, or blocking sunlight with satellites between the Sun and Earth.  While volcanic eruptions have been suggested as innocuous examples of stratospheric aerosols cooling the planet, the volcano analog actually argues against geoengineering because of ozone depletion and regional hydrologic responses.  In this talk, I describe different proposed geoengineering designs, and then show climate model calculations that evaluate both their efficacy and their possible adverse consequences.  No such systems to conduct geoengineering now exist, but a comparison of different proposed stratospheric injection schemes, using airplanes, balloons, and artillery, shows that using airplanes to put sulfur gases into the stratosphere would not be expensive.  Nevertheless, it would be very difficult to create stratospheric sulfate particles with a desirable size distribution.  Our GeoMIP project, conducting climate model experiments with standard stratospheric aerosol injection scenarios, is ongoing, but has already shown that temperature and precipitation responses would be uneven globally.    …. (more).