The images of scattered and torched storage boxes at the Ahmed Baba Institute in Timbuktu raised fears that thousands of the city’s famous manuscripts had been destroyed towards the end of Islamist rule.

Since Islamist militants were driven out of urban centres in northern Mali by French-led forces, there have been conflicting reports about the documents in Timbuktu, some of which date back to the 10th Century.

They think on their feet when faced with these challenges”

However, the majority of the manuscripts in the new South African-funded institute appear to have been protected.

South African researcher Mohamed Mathee, who is part of the Timbuktu Manuscripts Project, has been to Mali five times in the last decade.

He admits that he and his colleagues were extremely worried when the militants took control of Timbuktu last year.

However, the most recent communications with Mali have brought reassuring news.

“What we’ve heard from reliable contacts in Bamako is that most of the manuscripts are fine, they’ve not been harmed,” he said.

“I don’t think the loss is as great as has been reported because most of the manuscripts had been moved and taken to safety, long before the events of the past two weeks.” …(more).

The government needs to take urgent action to reduce the impact of flooding, MPs have said.

Ministers had been “too slow” in pushing through changes to improve protection, the Environment, Food and Rural Affairs Committee said.

But it welcomed government plans for more competition in the water sector, in its report on the draft Water Bill.

The government said the proposed legislation would build resilience into the UK’s water infrastructure.

However, Labour said the plans were “ideologically driven” and would bring higher bills and environmental damage. ….(more). 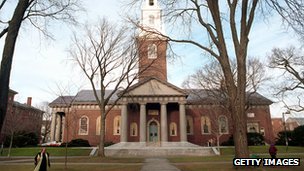 The students were taking an undergraduate course in politics

Harvard University has imposed academic sanctions on dozens of students for cheating in a final exam, a dean said in an email to students.

“More than half” of 125 students under investigation were asked to leave for a period of time; others face probation.

An inquiry began when a tutor noticed identical answers to a take-home exam for an undergraduate politics course.

The review expanded to include nearly half the 279 students enrolled in the course, the Harvard Crimson said.

Correspondents say there have been complaints that exam rules for the Introduction to Congress class were unclear, and over the university’s handling of the investigation.

In an email to members of the university, Faculty of Arts and Sciences Dean Michael Smith said the cases had now been resolved.

“Somewhat more than half” of the cases resulted in a request to withdraw, he said.

Of the remaining cases, about half the students were placed on disciplinary probation and the rest were exonerated. ….(more).

One of the largest uranium-ore deposits in the world, valued at about $7 billion, is located in an economically depressed, rural area of the southern U.S. state of Virginia. Regional activists have so far been able to block the company’s efforts, though, to lift a ban on uranium mining in Virginia. VOA’s Brian Padden has more.