Food columnist Mark Bittman on why he’s mad at Beyoncé and other pop musicians who endorse soft drinks. Environmental activist Mark Lynas on his about face on the issue of genetically modified foods, and the fallout he met with. Giles Slade, author of “The Big Disconnect,” on the loneliness that accompanies our passion for technology.

http://www.alternet.org/activism/how-deadly-prosecution-aaron-swartz-represents-extreme-security-state-tendencies-obamas?akid=9926.16660.hxj50k
A powerful indictment of our justice system, the Swartz case exemplifies the sick hypocrisy of persecuting information activists while corrupt corporations and bankers get off easy. 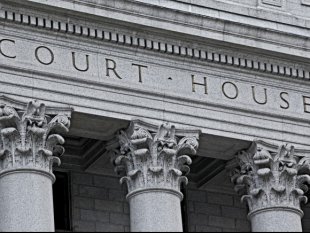 On Friday, January 11, 2013, 26-year-old visionary technologist and social activist Aaron Swartz hanged himself in New York City. A passionate advocate for making access to online information as widespread as possible, Swartz was grappling with the fallout from his efforts to do just that.

Two years before Swartz ended his life, he was arrested by police from the Massachusetts Institute of Technology and the City of Cambridge, Mass., police for breaking and entering into an MIT storage closet. In the closet, Swartz had stashed an Acer laptop he had programmed to download in bulk millions of scholarly articles from JSTOR, a non-profit database that provides access to the articles for academic libraries. At the time, articles on JSTOR were locked behind a paywall for non-academics who wished to access them through their own computers. Swartz aimed to make them available, free of charge, to anyone who wanted to read them. ….(more).

Scientists Call on President to Reject the Keystone XL Pipeline

OAKLAND CA — Eighteen of the nation’s top climate scientists released a letter to President Obama today urging him to say no to the Keystone XL tar sands pipeline.

“Eighteen months ago some of us wrote you about the proposed Keystone XL tar sands pipeline, explaining why in our opinion its construction ran counter to both national and planetary interests,” wrote the scientists. “Nothing that has happened since has changed that evaluation; indeed, the year of review that you asked for on the project made it clear exactly how pressing the climate issue really is.”

Indeed the past year has shown that climate change is here. A few months after Superstorm Sandy flooded parts of the Northeast, NOAA announced last week that the average temperature for 2012 was 55.3 degrees Fahrenheit, 3.2 degrees above normal and a full degree higher than the previous warmest year recorded

An open letter to President Obama: The time on the Doomsday Clock is five minutes to midnight | Bulletin of the Atomic Scientists

The Bulletin‘s Science and Security Board announces its 2013 decision to keep in place the minute hand of the Doomsday Clock: It will remain at five minutes to midnight. In this open letter to US President Barack Obama, the Board presents its views on the key issues that affected its decision and provides the president with recommendations to consider in 2013 and throughout his second term.

Editor’s note: Founded in 1945 by University of Chicago scientists who had helped develop the first atomic weapons in the Manhattan Project, the Bulletin of the Atomic Scientists subsequently created the Doomsday Clock in 1947 using the imagery of apocalypse (midnight) and the contemporary idiom of nuclear explosion (countdown to zero), to convey threats to humanity and the planet. The decision to move the minute hand of the Doomsday Clock is made every year by the Bulletin‘s Science and Security Board in consultation with its Board of Sponsors, which includes 18 Nobel Laureates. The Clock has become a universally recognized indicator of the world’s vulnerability to catastrophe from nuclear weapons, climate change, and new technologies emerging in other domains.

2012 was a year in which the problems of the world pressed forward, but too many of its citizens stood back. In the US elections the focus was “the economy, stupid,” with barely a word about the severe long-term trends that threaten the population’s well-being to a far greater extent: climate change, the continuing menace of nuclear oblivion, and the vulnerabilities of the world’s energy sources. 2012 was the hottest year on record in the contiguous United States, marked by devastating drought and brutal storms. These extreme events are exactly what climate models predict for an atmosphere overburdened with greenhouse gases. 2012 was a year of unrealized opportunity to reduce nuclear stockpiles, to lower the immediacy of destruction from missiles on alert, and to control the spread of fissile materials and keep nuclear terrorism at bay. 2012 was a year in which — one year after the partial meltdown at the Fukushima Daiichi Nuclear Power Station.         …(more). 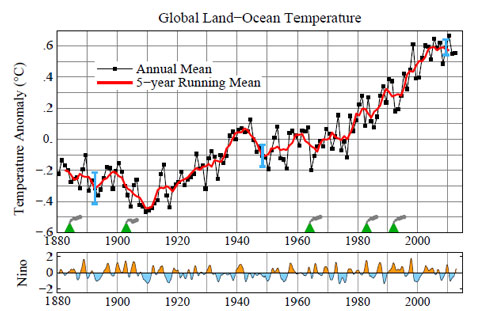 Summary. Global surface temperature in 2012 was +0.56°C (1°F) warmer than the 1951-1980 base period average, despite much of the year being affected by a strong La Nina. Global temperature thus continues at a high level that is sufficient to cause a substantial increase in the frequency of extreme warm anomalies. The 5-year mean global temperature has been flat for a decade, which we interpret as a combination of natural variability and a slowdown in the growth rate of the net climate forcing.
An update through 2012 of our global analysis1 (Fig. 1) reveals 2012 as having practically the same temperature as 2011, significantly lower than the maximum reached in 2010. These short-term global fluctuations are associated principally with natural oscillations of tropical Pacific sea surface temperatures summarized in the Nino index in the lower part of the figure. 2012 is nominally the 9th warmest year, but it is indistinguishable in rank with several other years, as shown by the error estimate for comparing nearby years. Note that the 10 warmest years in the record all occurred since 1998. ….(more). 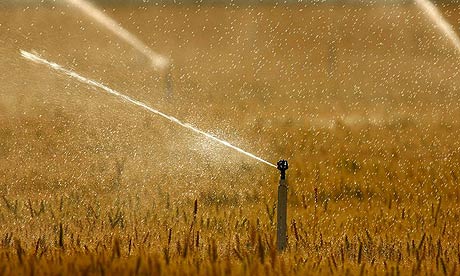 The world’s food crisis, where 1 billion people are already going hungry and a further 2 billion people will be affected by 2050, is set to worsen as increasing heatwaves reverse the rising crop yields seen over the last 50 years, according to new research.

Severe heatwaves, such as those currently seen in Australia, are expected to become many times more likely in coming decades due to climate change. Extreme heat led to 2012 becoming the hottest year in the US on record and the worst corn crop in two decades.

New research, which used corn growing in France as an example, predicts losses of up to 12% for maize yields in the next 20 years. A second, longer-term study published on Sunday indicates that, without action against climate change, wheat and soybean harvests will fall by up to 30% by 2050 as the world warms.

“Our research rings alarm bells for future food security,” said Ed Hawkins, at the University of Reading, who worked on the corn study. “Over the last 50 years, developments in agriculture, such as fertilisers and irrigation, have increased yields of the world’s staple foods, but we’re starting to see a slowdown in yield increases.”

He said increasing frequency of hot days across the world could explain some of this slowdown. “Current advances in agriculture are too slow to offset the expected damage to crops from heat stress in the future,” said Prof Andy Challinor, at the University of Leeds. “Feeding a growing population as climate changes is a major challenge, especially since the land available for agricultural expansion is limited. Supplies of the major food crops could be at risk unless we plan for future climates.”

Hawkins, Challinor and colleagues examined how the number of days when the temperature rose above 32C affected the maize crop in France, which is the UK’s biggest source of imported corn. Yields had quadrupled between 1960 and 2000 but barely improved in the last decade, while the number of hot days more than doubled.

What to expect from the weather in 2013

2012 had its share of memorable weather moments. AJE looks at how they might affect us in 2013. Al Jazeera’s Steff Gaulter reports.

STEALING AMERICA unveils patterns of anomalies at every level of the electoral process. Controversial partnerships perpetuate a secretive environment, as relevant facts and figures remain hidden from view. As a result, most Americans have no real sense of the threat to free and fair elections. As seemingly unrelated pieces of the puzzle come together, a chilling picture emerges of widespread, artfully crafted “glitches” that, in the final tallies, have the capacity to alter election results.

Could Just One Degree Change the World?

Witness how drastically our world could change if the earth warms by just one degree.

National Geographic – Six Degrees Could Change The World in 4 Segments