Are Wal-Mart and Big Food Lobbying the FDA for a GMO Labeling Law? 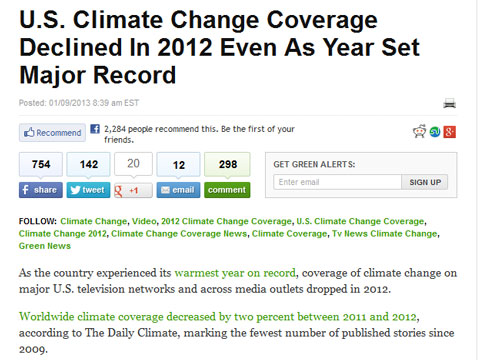 As the country experienced its warmest year on record, coverage of climate change on major U.S. television networks and across media outlets dropped in 2012.

Worldwide climate coverage decreased by two percent between 2011 and 2012, according to The Daily Climate, marking the fewest number of published stories since 2009.

Along with being the warmest year on record, 2012 was also second only to 1998 as the most extreme. Climate Central notes, “In response to global warming, some extreme events, such as heat waves, are already becoming more likely to occur and more intense.”

Researchers have shown that further delays in international action will make climate change goals more expensive and then eventually impossible.

According to an analysis by Media Matters, Sunday news talk shows on ABC, CBS, NBC and FOX spent fewer than 8 minutes on climate change in 2012. Coverage of climate change has been in decline since 2009, when the topic received over an hour of coverage.

Nightly news programs devoted more time to climate change in 2012 than in the previous two years, but still far less time than in 2009.2012 saw a presidential election marked by the absence of climate change during the national debates and charges of “climate silence” from activists.

The League of Conservation Voters, along with a coalition of 70 environmental organizations, recently penned an open letter to President Obama, urging him to focus on climate change in his second term. The letter read, “Cutting carbon pollution at home and rejecting dirty fuels will establish America’s leadership and credibility, enabling [President Obama] to create clean energy jobs in the United States while forging an effective international coalition to cut global carbon pollution.”

Brad Johnson, Campaign Manager for Forecast the Facts and ClimateSilence.org, said in a statement that he hopes the 2012 record, “will convince President Obama and Congress to lay out a plan to tackle carbon pollution and climate change.”

More devastating extreme weather is likely this year, and governments must respond to rising popular pressure to avert catastrophe 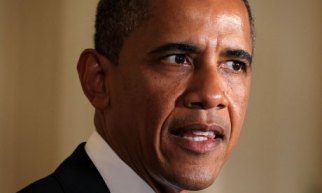 US president Obama sent a clear message about climate change during his acceptance speech. But will he and other world leaders finally take decisive action? Photograph: Alex Wong/Getty Images

I hope I am wrong. But in 2013, we can expect to witness more devastating extreme weather events, fuelled and supercharged by the destructive power of a warming planet brought about by climate change.

I hope to witness – and be part of – the exponential growth in popular pressure to force governments to take steps to avert catastrophic climate change. I hope to see even more unusual allies joining the global movement demanding climate action. ….(more).

The Socially Disadvantaged Farmers and Ranchers Program and Beginning Farmer and Rancher Development Program of USDA help diverse communities to achieve financial and environmental sustainability on their farms and ranches. We support renewal of these programs at equivalent funding levels, and urge inclusion of Asian American producers where appropriate.