Then came one roadblock after another. Congress did not pass a climate bill, cap-and-trade became a dirty word, and, with the 2012 elections approaching, climate change disappeared from the president’s vocabulary. He spoke about green jobs and clean energy but not about why these were necessary. In the immediate aftermath of Hurricane Sandy, he spoke only obliquely about the threat of rising seas and extreme weather events, both of which scientists have linked to a warming climate.

Since his re-election, Mr. Obama has agreed to foster a “conversation” on climate change and an “education process” about long-term steps to address it. He needs to do a good deal more than that. Intellectually, Mr. Obama grasps the problem as well as anyone. The question is whether he will bring the powers of the presidency to bear on the problem.   ….(more).

Playlist: Golden Crocoduck nominees 2013
The Golden Crocoduck is awarded every October 28 for the biggest breach of the 9th Commandment in pursuit of the Creationist cause.To nominate someone, please send me a message with the URL of the video, the nature of the 9th Commandment breach, and the time on the video where the breach can be found. I get dozens of messages every week saying simply “watch this”and I’m afraid I can’t , because I don’t have time. The only thing that induces me to watch a video you recommend is that you tell me what it’s about. Often the supposed ‘breach’ is simply a belief, and that does not qualify. Hint: If a creationist uses science to back up his claim, he’s almost certainly misrepresenting it.

Flow of Ice Across Antarctica 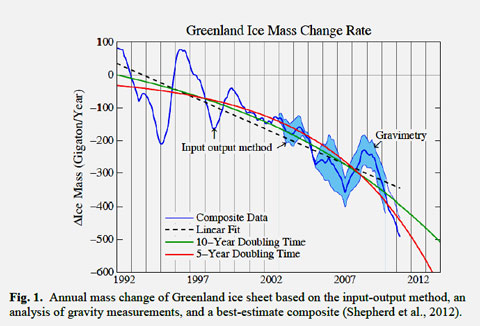 Shepherd et al. (2012) provide an update of the mass loss by the Greenland ice sheet (and the Antarctic ice sheet). They compare several analysis methods, achieving a reasonably well-defined consensus. The data is 2-3 years more current than data we employed recently (Hansen and Sato, 2012), so a new look at the data seems warranted.
A crucial question is how rapidly the Greenland (or Antarctic) ice sheet can disintegrate in response to global warming. Earth’s history makes it clear that burning all fossil fuels would cause eventual sea level rise of tens of meters, thus practically wiping out thousands of cities located on global coast lines. However, there seems to be little political or public interest in what happens next century and beyond, so reports of the IPCC (Intergovernmental Panel on Climate Change) focus on sea level change by 2100, i.e., during the next 87 years. …. (more)