One of America’s biggest energy challenges is foreign oil dependency. The U.S. imports about half the oil it uses, putting the nation’s energy security at risk and costing hundreds of billions of dollars per year. New drilling innovations are unlocking vast new reserves and boosting local economies. But is the new drilling also forcing a tough choice between oil and water in drought-stricken Texas? This week, energyNOW! explores the latest U.S. oil boom.

Black Gold From Shale Rock
The combination of horizontal drilling and hydraulic fracturing in shale rock formations is opening up previously unrecoverable oil, just as those technologies did for natural gas. It’s driving a boom in U.S. energy production and creating bright spots in a tough economy across America.

Is The Oil Boom Worsening The Texas Drought?

Texas is home to America’s second largest shale oil field, and business is booming – production has skyrocketed from under 1,000 barrels a day in 2004 to more than 8 million so far in 2011. But hydraulic fracturing in shale rock requires millions of gallons of water, a precious resource during one of the worst droughts in the state’s history.

Anchor Thalia Assuras visits the Eagle Ford shale in Texas to see how rapidly expanding water use by energy companies is impacting the state.

Fracking operations may be competing for water supplies in Texas, but they have also raised concerns about water safety in other parts of the country. 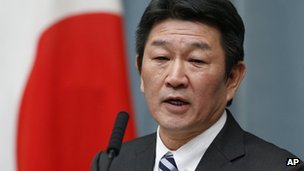 The new government in Japan has announced it will review the planned nuclear power phase-out proposed by the previous administration.

Trade and Industry Minister Toshimitsu Motegi said that reactors would be restarted if considered safe by the nuclear authority.

The stoppage of nuclear power use by 2040 was ordered following last year’s Fukushima disaster.

However, the failure of the previous Democratic Party to put an end to years of economic stagnation led to an overwhelming poll victory for their rivals earlier this month.