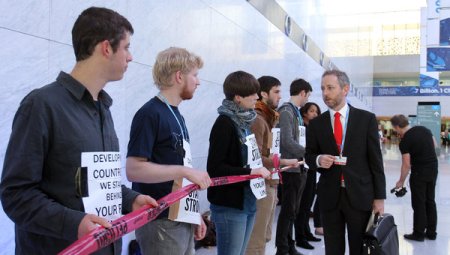 DOHA, Qatar — The annual United Nations climate change negotiations concluded here late Saturday after the customary all-night negotiating session and recriminations over who must bear the costs and burdens of a warming planet.

A blog about energy and the environment.

Delegates from more than 190 nations agreed to extend the increasingly ineffective Kyoto Protocol a few years and to commit to more ambitious — but unspecified — actions to reduce emissions of climate-altering gases.

Wealthy nations put off for a year resolution of the dispute over providing billions of dollars in aid to countries most heavily affected by climate change. Industrial nations have pledged to secure $100 billion a year by 2020 in public and private financing to help poor countries cope with climate change, but have been vague about what they plan to do before then.

Only a handful of countries, not including the United States, have made concrete financial pledges for adaptation aid over the next few years. Todd D. Stern, the senior American negotiator, said that the United States would continue to provide substantial climate-related aid to vulnerable countries. But he said he was not in a position, given the budget talks in Washington and the Congressional process, to promise new American financing. …(more).