The Undemocratic Nature of U.S. Elections…

Did you know Democracy was helped by the Pirates? 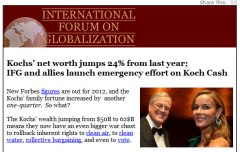 The International Forum on Globalization (IFG) promotes equitable, democratic, and ecologically sustainable economies.We were formed in response to widespread concerns over economic globalization, a process dominated by international institutions and agreements unaccountable to democratic processes or national governments. Speaking the language of “free-trade” and poverty alleviation, organizations like the WTO, the IMF, and the World Bank impose a development model which seems designed to benefit transnational corporations over workers; foreign investors over local businesses; and wealthy countries over developing nations. 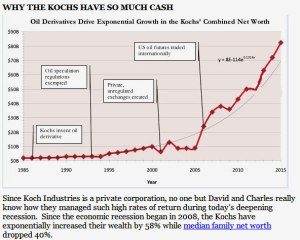 When the IFG first presented its globalization critique a decade ago, the economic globalization model was widely accepted. Today, the institutions of globalization are undergoing a crisis of legitimacy. Corporate scandals such as Enron and Worldcom, the failures of IMF and World Bank policies and programs, the recent break down of WTO negotiations, and other events reveal that the benefits of globalization that were promised by its advocates have not come to fruition.

Koch Brothers Exposed is a hard-hitting investigation of the 1% at its very worst. This full-length documentary film on Charles and David Koch — two of the world’s richest and most powerful men — is the latest from acclaimed director Robert Greenwald (Wal-Mart: the High Cost of Low Price, Outfoxed, Rethink Afghanistan). The billionaire brothers bankroll a vast network of organizations that work to undermine the interests of the 99% on issues ranging from Social Security to the environment to civil rights. This film looks to uncover corruption by the Kochs — and points the way to how Americans can reclaim their democracy.

Apple iPhone 5: An in depth review

Apple iPhone 5: An in depth review

As Apple launches its new iPhone 5 in the UK, the Guardian’s technology editor, Charles Arthur, gives an in-depth review of the new smartphone and its capabilities. New features on the iPhone 5 include turn-by-turn navigation, new maps, 4G, restore to iCloud, a panoramic camera and a more advanced version of Siri

Better Safe Than Sorry: A Focus on Food

(Visit: http://www.uctv.tv/) From the field to the table, UC Davis researchers are on the front line of research, working to make safe, healthy and flavorful food. Hear from a family caught in the deadly 2006 E. coli outbreak, chemists working on improving the taste of food, chef Martin Yan, and California almond farmers, all benefiting from discoveries that lead to enhance the safety, quality and taste of our food supply. [9/2012] [Health and
Medicine] [Science] [Agriculture] [Show ID: 24199]

Study: Herbicide and GM Corn May Cause Tumors, Early Death

http://www.foodsafetynews.com/2012/09/study-herbicide-and-gm-corn-may-cause-tumors-early-death/#.UFtFHVGBVQV
Study: Herbicide and GM Corn May Cause Tumors, Early Death
by Gretchen Goetz | Sep 20, 2012
New research out of France has linked both an herbicide and a genetically modified corn to organ damage, tumors and early death among rats, prompting a call for greater regulation of GM foods among sustainable agriculture advocates.

The study – published Wednesday in Food and Chemical Toxicology – found that rats who were exposed to Roundup, a weed killing herbicide, and rats who were fed Roundup-resistant corn developed mammary tumors, kidney and liver damage and died earlier than those in the control group.

According to the authors, this is the first study to examine the long-term effects of genetically modified Roundup Ready corn, or NK603, which is produced by biotech corporation Monsanto and has been approved for use in both the European Union and the United States.

When will the total collapse of the Arctic ice sheet occur?

A Million Davids vs. Monsanto’s $Millions

http://organicconsumersfund.org/donate/david-goliath.cfm
Millions of Davids vs. Monsanto’s Millions of Dollars

The Goliaths of the biotech and processed-food industries have raised $27.2 million to defeat Prop 37, the California Right to Know Genetically Engineered Food Act, and keep you from knowing what’s in your food. We can win with much less money. But we do need to raise another $1 million by Sept. 30th to educate voters, distribute leaflets, print signs, saturate the media with the truth about GMOs, and get out the vote.