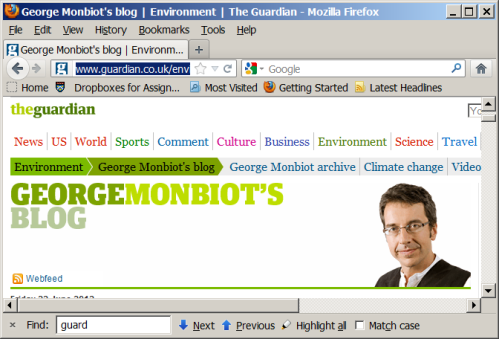 This is an important new comment from George Monbiot in London.
http://www.guardian.co.uk/environment/georgemonbiot

Another Way of Seeing: Nature and the Creative Lens of R. Lee Post | Cambridge Community Television

Another Way of Seeing: Nature and the Creative Lens of R. Lee Post
Cambridge Community Television.

As we discuss the spate of extreme weather in the U.S., the author and professor Christian Parenti argues that the Republican-led assault on the public sector will leave states more vulnerable to global warming’s effects. “Another thing missing from these discussions — it’s not just the words ‘climate change,’ but the words ’public sector,’” Parenti says. “I mean, who’s out there fighting these fires? It’s the public sector. Where do people go when there are these cooling centers? It’s the public sector. … This assault on the public sector must be linked to climate change.” We’re also joined by The Guardian’s U.S. environment correspondent Suzanne Goldenberg and by Jeff Masters, director of meteorology at the Weather Underground website. [Transcript to come. Check back soon.]
Filed under  extreme weather, Global Warming, Climate Change, Environment, Christian Parenti, Suzanne Goldenberg, Jeff Masters
Guests:

Christian Parenti, professor of sustainable development at the School for International Training and the author of several books, most recently, “Tropic of Chaos: Climate Change and the New Geography of Violence.”

Suzanne Goldenberg, U.S. environment correspondent of The Guardian. She just returned from reporting on the forest fires in Colorado, and earlier covered a similar outbreak in New Mexico. She’s now in Washington, D.C., covering the extreme weather impacting much of Midwest and East Coast.